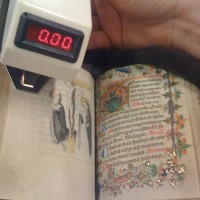 University of St. Andrews art historian Dr. Kathryn Rudy has devised an ingenious new way to unveil the deepest fears, reading and prayer habits of medieval people. Using a machine called a densitometer, she measures how much dirt is on each page of a medieval manuscript. The dirtiest pages are the ones that were open the most, and therefore most read and referred to.

Dr Rudy said: “Although it is often difficult to study the habits, private rituals and emotional states of people, this new technique can let us into the minds of people from the past.

“In the century before printing, people ordered tens of thousands of prayer books – sometimes quite beautifully illuminated ones – even though they might cost as much as a house.

“As a result they were treasured, read several times a day at key prayer times, and through analysing how dirty the pages are we can identify the priorities and beliefs of their owners.”

Dr. Rudy analyzed a number of European prayer books. She found that one of the most read pages was a prayer to St. Sebastian, the saint who was shot full of arrows at the command of Diocletian but didn’t die from it. The iconography of the nearly nude martyr with wounds all over his body that he survived associated Sebastian with surviving the plague. Legend has it that after an altar was built in his honor in 7th century Lombardy he stopped a plague, so praying to St. Sebastian was deemed a protection against it. Given the alarming frequency and mortality of plague in medieval Europe, it makes sense that the prayers to Sebastian would be among the most frequently recited.

In people-are-people news, prayers for the salvation of one’s own soul were more often read than prayers for the salvation of other people’s souls, and the prayers read in the wee hours of the night and morning are dirty mainly on the first couple of pages. After that, readers consistently stopped, no doubt because they were face down in a puddle of their own drool, snoring happily.