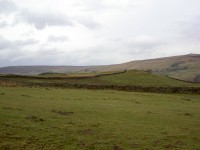 Whitley Castle, a.k.a. Epiacum, is a Roman fort in Northumberland close to the border with Cumbria, 12 miles south of Hadrian’s Wall. It’s also a scheduled ancient monument, a legal designation that prohibits all excavation on the site. Not even the landowners (Elaine and John Edgar of Castle Nook farm) are allowed to touch the soil. Moles, however, care not for our puny human “laws.” Moles laugh in the court’s collective peruked face and dig with impunity as deep under the fort as their little hearts desire.

Seizing the opportunity afforded by the moles’ tireless efforts, a team of 37 volunteers assembled on the site to sift carefully through the molehills for ancient artifacts under the careful supervision of English Heritage whose presence made the sifting legal and who assessed the artifacts as they were found.

Among the finds were:

A number of pottery rim fragments from Roman serving bowls and earthenware pots;

A jet bead from a Roman necklace or bracelet.

Roman pieces that had been brought to the surface by the dirt-churning vigor of the moles were found last year too, including a number of nails that confirmed the fort was not solely built out of stone but also of wood. A visitor on a guided walk stumbled on a small bronze dolphin that might have been part of a bath tap.

For now, the Roman artifacts are in the care of Paul Frodshaw, one of the directors of Epiacum Heritage Ltd, a company dedicated to the promotion and development of Epiacum. Elaine Edgar is a co-founder and one of the directors. Frodshaw will catalogue every artifact before returning them to the landowners. Edgar just this month received a £49,200 Heritage Lottery grant which Epiacum Heritage plans to use to raise the profile of the fort as a tourist attraction. The ultimate aim is to have all the artifacts the moles have unearthed be part of an on-site display. 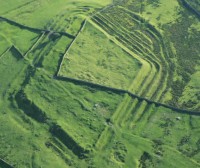 Epiacum is the highest stone Roman fort in Britain. Its unique diamond-shaped structure once housed a garrison of about 500 Roman soldiers who were probably in charge of supervising local lead and silver mining operations. It was built at the same time as Hadrian’s Wall (ca. 122 A.D.), but the wall a dozen miles away gets thousands of visitors each year, while Epiacum, despite its unusual design, extensive remains including a civilian settlement, a bath house, some of the best preserved stone ramparts in the entire Roman Empire, not to mention the in-house mole archaeologists, goes almost entirely unnoticed.

It never really has gotten the attention it is due. Small excavations in the 19th and first half of the 20th centuries turned up a number of important artifacts like intact leather shoes, coins, pottery and altars to Apollo, Hercules, Minerva and Mithras. Nonetheless, even before it became a scheduled monument Epiacum was barely touched.

The new corporation has plans to create an interpretation center and hopefully lure tourists to the “hidden gem of the North pennines” but they’ll need to raise more funds to make it happen. They also need volunteers to help develop the site within the parameters of the scheduled ancient monument designation. For instance, volunteers can help survey the site in more detail, adding to our understanding of the fort and its occupants during its 200 or so years of habitation. If you’re interesting in volunteering, click on the Help Out page of the website and fill in the email form. Follow Epiacum Heritage’s progress on Twitter @epiacum.

Many thanks to Elaine Edgar for correcting some errors in this entry and for sharing information about Epiacum Heritage’s goals. :thanks: