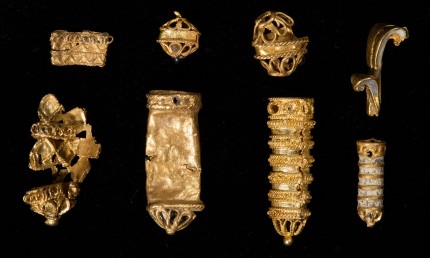 A group of tiny gold objects from the early 16th century may be all that’s left of an extremely snazzy hat. Twelve small gold artifacts have been found in the Thames mud by eight different people over the past few years. When treasure hunters and licensed Thames mudlarks find artifacts of note in the tidal muck of the river, they bring it to archaeologist Kate Sumnall, the Portable Antiquities Scheme’s Finds Liaison Officer for London. Sumnall realized that the gold artifacts are very similar and since they were all found in one area of the Thames foreshore, she believes these tiny gold objects were originally been attached to a single piece of clothing which has long since rotted away. A hat is a likely candidate, since a strong gust of wind could have dislodged it from its wealthy owner’s head and driven it into the river whereas a jacket, say, tends to stay put.

Such metal objects, including aglets – metal tips for laces – beads and studs, originally had a practical purpose as garment fasteners but by the early 16th century were being worn in gold as high-status ornaments, making costly fabrics such as velvet and furs even more ostentatious. Contemporary portraits, including one in the National Portrait Gallery of the Dacres, Mary Neville and Gregory Fiennes, show their sleeves festooned with pairs of such ornaments.

Several of the pieces have the same gold loops and gold rope design. A few are inlaid with enamel or colored glass. Because they’re so small, the amount of gold is minimal — less than could fill an egg cup, apparently — but any gold at all has to be reported to the local Finds Liaison Officer who documents the discovery before passing it on to British Museum experts who assess it for the coroner’s inquest. At the inquest the coroner decides whether the object qualifies as treasure under Britain’s Treasure Act — anything more than 300 years old containing more than 10% gold or silver — and thus belongs to the crown.

Sumnall works at the Museum of London Docklands. Once these artifacts have been declared treasure (a foregone conclusion because of the gold), the museum wants to acquire the group for its collection. 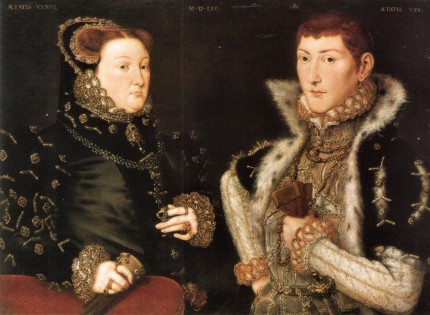