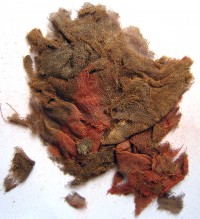 Analysis of rare ancient textiles discovered in a tomb in Nepal suggest the Silk Road network may have extended further south than previously believed. The textile fragments were found in the Samdzong 5, one in a complex of 10 shaft tombs dug into a cliff face in Upper Mustang, Nepal, between 400 and 650 A.D. (Samdzong 5 dates to around 500 A.D.). The complex is 4,000 meters above sea level and 30 meters above ground surface and can only be accessed climbing the cliff face. People didn’t even know they were there until an earthquake in 2009 sheered off the facade of the cliff and exposed the tombs. The earthquake also caused the ceilings of the tombs to collapse, damaging the contents and accelerating the decay of organic that had otherwise been well-preserved thanks to the high altitude and stable dry conditions inside the caves.

Archaeologists have discovered the remains of 105 people in the tomb complex, but Samdzong 5 only contained two sets of disarticulated remains, one of an adult, one of a child aged 8-12. The skeletal remains of the adult were found in a wooden coffin with an impressive array of associated grave goods: two large copper vessels, a ladle, iron daggers, cups and trays made of wood and bamboo, copper and bronze bangles and thousands of glass beads. The star artifact was a mask made of gold and silver that archaeologists believe was a death mask placed over the face of the adult. Pinholes border the edges of the mask, which indicates the mask was once sewn to fabric. Textile fragments were discovered in close proximity to the coffin and goods.

Small samples from four textiles were examined with a scanning electron microscope to identify the fibers and their source(s). Two of the samples are degummed silk in a fine tabby weave. The yarn is untwisted and glossy, typical of Chinese silk. These textiles almost certainly were traded over long distances to get to Nepal, because there was no local silk production. The other two samples were found to be animal fibers in a warp-faced tabby and a twill weave. Cloth beads and copper tubular beads were sewn into the textiles in parallel rows.

The metals and beads were also found to have originated outside of Nepal. Some of the metals came from either Tibet or India; the beads came from a number of sources including South Asia, Central Asia and Sassania. The pigments were analyzed using micro-Raman spectrometry (MRS), the organic dyes using high pressure liquid chromatography with diode array detection (HPLC-DAD). MRS identified cinnabar pigment; HPLC-DAD found Indian lac, munjeet, turmeric (curcuma) and dyer’s knotweed or indigo dyes. All of these materials can be sourced in India or environs.

Identification of degummed silk fibres and munjeet and Indian lac dyes in the textile finds suggests that imported materials from China and India were used in combination with those locally produced. Says Gleba: “There is no evidence for local silk production suggesting that Samdzong was inserted into the long-distance trade network of the Silk Road.”

“The data reinforce the notion that instead of being isolated and remote, Upper Mustang was once a small, but important node of a much larger network of people and places. These textiles can further our understanding of the local textile materials and techniques, as well as the mechanisms through which various communities developed and adapted new textile technologies to fit local cultural and economical needs.”

The use imported, expensive materials as well as local ones is all unique to Samdzong 5, as are the mask and coffin. The other tombs have very little cultural material of any kind, just the human remains. This indicates the person in Samdzong 5 was an elite individual.