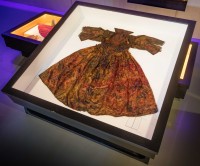 Historians Helmer Helmers from the University of Amsterdam and Nadine Akkerman from Leiden University have identified the owner of the silk gown found in the Wadden Sea off the island of Texel in North Holland. It belonged to Jean Kerr, Countess of Roxburghe, lady-in-waiting to Queen Henrietta Maria. There’s a portrait of her on Adel Foundation’s website that they were able to get from the collection of Floors Castle, seat of the current Duke of Roxburghe and Scotland’s largest inhabited castle. The photo leaves much to be desired, I’m afraid, but she’s wearing a dress that is somewhat reminiscent, albeit more elaborate, of the one wrecked at sea.

There were two key clues to the identity of the gown’s owner: the ship sank in the first half of the 17th century, and the leather book cover stamped with the coat of arms of King Charles I, the second Stuart king of England, Scotland, and Ireland. As soon as Nadine Akkerman was apprised of the find, she remembered a letter she had transcribed in 2006 written by Elizabeth Stuart, sister of Charles I and exiled Queen of Bohemia, to her old friend the diplomat and Member of Parliament Sir Thomas Roe. The letter, dated March 17th, 1642, tells how her sister-in-law Queen Henrietta Maria lost a baggage ship on the voyage from England to Holland. Her two ladies-in-waiting and their maids lost their clothes and accessories; the queen lost some silver vessels from her private chapel. The style and size of the gown strongly indicate it belonged to Jean Kerr.

The Countess of Roxburghe was born around 1585. She was descended through her maternal line from Robert II, the first Stuart King of Scotland, which made her a very high-ranking lady. She was Mistress of the Robes to the court of James I and Queen Anne, both of whom attended her marriage to Robert Kerr, 1st Lord Roxburghe, in 1614. Three years later she was dismissed from Court when her husband tried to finagle a political appointment without the knowledge of the Queen, but in 1631, with a new King, Charles I, and Queen, Henrietta Maria, on the throne, she made her way back to Court and was appointed governess to the infant Princess Mary. She was later made governess to Princess Elizabeth (born 1635) and Prince Henry (born 1640).

This voyage to Holland was an infamous one. The ostensible purpose of the trip was to deliver Charles and Henrietta Maria’s daughter Mary, then ten years old, to her 15-year-old husband William, son and heir of Frederick Henry, Prince of Orange. Their wedding had taken place on May 2nd, 1641, in London. Reuniting the couple was a convenient pretext for Henrietta Maria to leave England and head for the continent where she could drum up support for the Royalist cause.

Her baggage was actually far more significant than her daughter. On February 23rd, 1642, Queen Henrietta Maria set sail from Falmouth with her daughter, her ladies-in-waiting, and the Crown Jewels. She also carried large quantities of silver and jewels that belonged to her and Charles personally, including those vessels from her chapel that were lost in the Texel wreck. The real reason for the trip to Holland was to sell or pawn these treasures, the most valuable of which were the patrimony of Britain, to fund a war against the British. Holland was the biggest market for the trade in high-end jewels and precious metals, so her daughter’s marriage to the heir of Orange was the perfect screen for her real intent.

Henrietta Maria arrived at The Hague on March 11th, 1642, where she was met by Elizabeth Stuart who had moved to The Hague after her exile. The loss of the baggage ship, while inconvenient as losing your luggage still is even now that it’s in airports instead of the bottom of the ocean, didn’t slow her down a bit. Mere days after her arrival, she was already trying to cut deals for the sale/hocking of the valuables that she’d kept with her.

This wasn’t exactly a stealth operation. In 1641 Parliament had officially protested that a plan of hers to take the waters at Spa, in what is now Belgium, for her health was in fact a blatant attempt to “convey great Sums of Money, and other Treasure, beyond the Seas; which will not only impoverish the State, but may be employed to the Fomenting some mischievous Attempts, to the Trouble of the publick Peace.” They were right, of course. Henrietta Maria was an active partner in Charles’ military and political ventures, often an instigator. She was a French Catholic — double trouble to English Protestants — and had an enormous influence on her husband. Her attempt to sell England’s Crown Jewels to fund a war against their (also British) enemies was the kind of machination that confirmed the worst suspicions about her and Charles.

The mission didn’t go well. Potential buyers and lenders were justifiably wary about the Crown Jewels. There was no clear title and the letter signed by Charles I saying he owned them that Henrietta deployed when people raised questions was hardly persuasive. With Parliament very publicly watching her every move, prepared to reclaim any pawned objects, buyers stayed away in droves. She wrote her husband in May that: “The money is not ready, for on your jewels, they will lend nothing. I am forced to pledge all my little ones, for the great ones, nothing can be had here….”

As for Jean Kerr, after she accompanied her young charge Princess Mary to The Hague, she turned around almost immediately, returning to her even younger charges, Elizabeth and Henry. She died just a year later, on October 7th, 1643.