Late on the night of June 30th or early in the morning of July 1st, 2008, a blue-and-white glazed terracotta relief of Saint Michael the Archangel by Andrea della Robbia (1435-1525) on display at the Metropolitan Museum of Art fell from its metal wall mounts high on a wall above a doorway and crashed to the ground. A security guard found the lunette the next morning on its back on the stone floor, broken into many pieces. The gallery was closed and conservators picked up the pieces, some large — Michael’s head was undamaged — and some as small as fingernails. The pieces were bagged and numbered and removed to the museum’s Department of Objects Conservation later that day.

The Met hasn’t had the greatest luck with the mounting of their Renaissance masterpieces. At least they were able to puzzle out this jigsaw in seven years. The fall of Tullio Lombardo’s Adam in 2002 was even more catastrophic; it took 12 years to put all of his pieces back together. The museum notes all wall-mounted sculpture was reviewed after the accident, and new systems — comprehensive and regular inspections, formal approval of all mounts — were put in place to prevent something like this happening again.

Andrea della Robbia’s uncle Luca (1400-1482), who in his youth had an illustrious career a sculptor in bronze and marble, invented the blue and white tin-based glazes that made terracotta reliefs exceptionally durable, easy to clean and impervious to the vagaries of the weather. The glazed earthenware pieces were significantly less expensive than marble or bronze, and since they looked so good and needed so little care, soon della Robbia reliefs were in great demand. Luca’s clients included some of the most important people and institutions in Florence — Piero de’ Medici, Jacopo de’ Pazzi, the Duomo — and elsewhere.

Andrea, who had learned the secret glaze recipe as his uncle’s pupil, took over operations of the della Robbia workshop on Via Guelfa in Florence in the late 1460s or early 1470s. He picked up where his uncle left off, executing high-end commissions for reliefs of increasing size and architectural importance from major private clients and churches all over northern Italy. Saint Michael the Archangel was made around 1475 for the church of San Michele Arcangelo in Faenza, a town outside Ravenna known for its majolica pottery. In fact, the town is literally synonymous with majolica tin-glazed earthenware which became known as faience after Faenza. The relief was installed above the church door and remained there until 1798 when the church was demolished and Saint Michael the Archangel sold.

The Met acquired the piece in 1960 at an auction of the estate of American industrialist and diplomat Myron C. Taylor for $40,000 (about $320,000 today). The museum has one of the most important collections of della Robbia works in the United States, including an exquisite Virgin and Child. Saint Michael, however, is probably the most important of all.

There was an upside to the crash. Conservators were able to study the relief thoroughly before they went about reassembling the pieces. They found the artist’s finger and tool marks which shed new light on della Robbia’s production process. The workshop made quality artworks for refined and wealthy clients, but it also had to crank out new pieces at a canter to keep up with demand. Conservators found evidence of this in Saint Michael’s robe. It was made separately and then attached to the lunette, but the toga cracked during firing. Instead of starting over again — a time-consuming and expensive approach — they stuck it back together. It was going above a door, after all, and nobody was going to be at eye-level to see the tiny fissure lines.

The sculpture was originally made in 12 interlocking pieces. While conservators Wendy Walker and Janis Mandrus reassembled the broken pieces and filled in the areas of paint loss, conservation preparator Fred Sager developed a custom mount that secured each of the 12 sections individually to an aluminum backing plate. This makes it safer while still allowing visitors to enjoy the entire composed piece.

The most challenging part of the restoration, Ms. Walker said, was the in-painting between repaired cracks — trying to recreate the signature cobalt della Robbia blue that the critic Walter Pater described as being like “fragments of the milky sky itself, fallen into the cool streets.”

“In the morning it would look good,” she said of the modern paint, “and by noon, in a different light, you’d see and go, ‘No!’ and just want to pull your hair out.”

But another lesson the accident taught, in the end, was how durable della Robbias were made to be, despite their humble, seemingly fragile clay origins. St. Michael’s head, for example, was completely unharmed after its violent detachment the night of the fall.

“For hundreds of years, this was outside, in the elements, protected by its glaze,” Mr. Bell said. “And the amazing thing about these ceramics is that the surface still looks pretty much the same as the day it came out of the kiln.”

The relief is now back in the Met’s European Sculpture and Decorative Arts Galleries, but this time it’s been mounted about at eye level to allow visitors to get a proper look at della Robbia’s amazing details, like the facial expressions and the little babies on the scale. They’re actually souls, not babies, weighed on the scales of justice and mercy. The happy light-weight one is saved for heaven; the facepalming heavy one is doomed to hell. 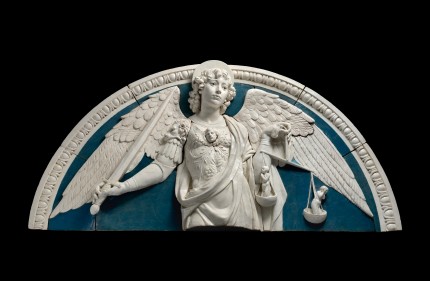