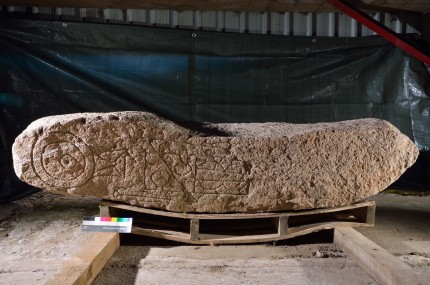 Three years have passed since Andy Johnstone broke a plough on a 1,500-pound Pictish Symbol Stone in a field in Dandaleith, near Craigellachie in northeastern Scotland. Landowner Mr. Robinson reported the find to the Aberdeenshire Council Archaeology Service (ACAS) and its experts determined the stone is Class I, the earliest type of symbol stone. It dates to the 6th-8th century B.C. and the symbols — an eagle, a crescent, a V-rod, a mirror case symbol, a notch rectangle and Z-rod — are carved on two adjacent sides, a unique configuration so far as we know.

Mr. Robinson allowed the five and a half foot-long pink granite stone to remain on his property for a year before arrangements could be made to remove it for conservation. In 2014, the Dandaleith Stone was transferred to Graciela Ainsworth Sculpture Conservation in Leith, Edinburgh, where Graciela Ainsworth’s team conserved it, documented it and laser scanned it to create a 3D model of the stone.

Meanwhile, the symbol stone was declared a Treasure Trove and the Scottish Archaeological Finds Allocation Panel allocated the find to the Elgin Museum, Scotland’s oldest independent museum (est. 1842), in Elgin, just 15 miles north of Dandaleith. The museum then had to raise the funds to pay the landowner and finder a fee equal to its assessed market value, plus more to pay for transportation, conservation and display. The fundraising was successful, thanks to contributions from the Heritage Lottery Fund, AIM, the Art Fund, the Pilgrim’s Trust, and Aberdeenshire Council Archaeology Service.

On March 1st of this year, the Dandaleith Stone was transported to the Elgin Museum by Graciela Ainsworth. She also brought the carved Pictish and early Medieval stones from the museum’s permanent collection that were conserved at her Edinburgh facility. The next day, the Dandaleith Stone was hoisted into position in the museum’s new display by the Elgin Marble Company which generously donated the equipment, time and manpower necessary to raise the massive stone and install it vertically next to a new row of lit shelves to display the museum’s other, much smaller carved stones.

The new Pictish Stone display opened to the public on Saturday, March 26th. Ploughman and finder Andy Johnstone was invited to cut the ribbon at the exhibition opening.