An archaeological excavation at the house Malcolm X lived in during his teens and early 20s has surprisingly unearthed artifacts from the 18th century. Built in 1874, the house at 72 Dale Street in Boston’s Roxbury neighborhood belonged to Ella Little-Collins, Malcolm’s half-sister who was his guardian after his mother was committed to a psychiatric facility in Michigan. (Ella and Malcolm’s father was killed when Malcolm was just six years old.) He lived with her off and on from the age of 14 until he was 21. The house is the last boyhood home of Malcolm X known to survive.

Ella could no longer bear to live in the house after Malcolm’s assassination in 1965, but she owned it until her death in 1996 when it passed to her son Rodnell Collins who is the current owner. Relatives stayed there instead, and when the last of them moved out in the 1970s, the house was left vacant for thirty years. Its condition deteriorated, and even its designation as a historic landmark in 1998 didn’t stop the downward slide. Rodnell moved back in and invested $80,000 in repairs to the house to make it livable.

In June of 2012, the Malcolm X-Ella Little Collins House was named by the National Trust for Historic Preservation one of the country’s 11 Most Endangered Historic Places. This brought national attention to the home and its dire circumstances. As a result, Historic Boston, Inc., received several grants which allowed them to do a comprehensive assessment of the structure and stabilize it to prevent further damage.

Now the Collins family plans to fully restore the house with the aim of opening it for tours. Rodnell Collins, 71, will be the guide, which is going to be amazing because he was actually there when Malcolm was. He has so many memories to share. The first step in the restoration is shoring up the foundations. Since the yard is going to be dug up anyway, archaeologists have the opportunity to excavate it first. 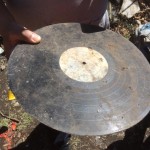 The dig began on March 29th. Experts from UMass Boston’s Fiske Center for Archaeological Research surveyed the yard with Ground Penetrating Radar (GPR) to identify anomalous areas of potential interest. Archaeologists, aided by volunteers from the community and Malcolm X’s family, excavated the spots with most potential for revealing artifacts and historical information. They found fragments of porcelain from Ella Little Collins’ dishes, a peach pit from her peach tree, a toy truck Rodnell remembers playing with, even an intact LP record whose label was gone but the serial number indicated was a folk song compilation album from 1959. (You can listen to side one here.) 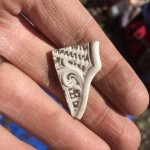 The Little-era artifacts were expected, as were the pieces of 19th century pottery. The fragments of 18th century ceramic, on the other hand, were decidedly unexpected. According to the municipal archives, the house, indeed the entire street, was built on agricultural land, farmed since the 1600s. The artifacts suggest there may have been an unrecorded building on the site.

Because the Malcolm Little history is so recent and Rodnell Collins is so closely involved in the project, archaeologists have a unique chance to explore history both oral and documentary as well as the material culture of the site. City of Boston archaeologist Joseph Bagley explained the rare confluence in an interview with Radio Boston:

“Normally, on the sites that we’ve been doing, they’ve been a lot older, there’s no way around that…. [We] very rarely have the opportunity as archaeologists to work with people who were alive during the time that we are interested in studying. So it’s almost like we get kind of a behind-the-scenes tour of our own historic sites when we have the family members there. We’re able to take the combination of the oral history from Rodnell and his family, the written records that we have through the census and the deed records and the stuff that we have about Malcolm that’s very widely written, and we can also add the artifacts to that. So we can kind of do a three-part historical view of this house.” 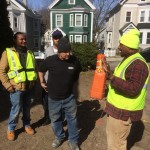 To add to the historical richness, Jack Hallion, son of a man who grew up in the house and whose family sold it to Ella and Kenneth Collins in 1941 unexpectedly visited the dig on March 30th. Nobody contacted him or anything. The excavation was open to the public every day and received a great deal of local press, so he just stopped by to add two more generations of background to the story.

The dig was originally scheduled to run through April 8th, but five inches of snow forced a work stoppage. Excavations will resume on May 16th.