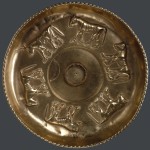 The British Museum has opened a new exhibition, Sicily: Culture and Conquest, which brings together more than 200 artifacts from 4,000 years of Sicilian history, many of which have never been to the UK before. The exhibition focuses on two time periods when Sicily was at the forefront of art and culture: when it settled by Greek colonists in the 7th century and when it was ruled by Norman kings from 1100 to 1250.

Objects on display include pieces from the British Museum’s collection, other institutions in the UK and elsewhere, and some spectacular pieces on loan from Sicily.

A rare and spectacularly well preserved, brightly painted terracotta altar, dating to about 500 BC, is one of the highlights of the loans coming from Sicily. It shows a scene of an animal combat on the upper tier, while below stand three striking fertility goddesses. The British Museum is also fortunate to be receiving on loan a magnificent terracotta architectural sculpture of a Gorgon, the famous Greek monster, that was once perched on the highest point of a building at Gela in south-east Sicily. Terracotta ornaments were frequently used to decorate the upper levels of buildings on Sicily and are amongst the finest that have survived from the ancient world. Another important Sicilian loan

is a rare and iconic marble sculpture of a warrior from ancient Akragas, modern Agrigento. Marble statues were likely to have been commissioned, carved and imported into Sicily from overseas or made by local sculptors, trained in the Greek tradition. Such rare statues decorated major temples or were part of sculptural groups, most of which are long gone.

The pieces from the Norman era emphasize what a cultural crossroads it was. The Normans conquered Muslim Sicily in 1072 and the court took full advantage of the rich well of artistic talent from diverse cultures — Greek, Roman, Byzantine, Arabic — who had ruled the island before them. There’s a gold mosaic of the Virgin Mary of Byzantine style which is the sole surviving panel of the mosaics that once adorned Palermo Cathedral (only on display until June 14th), a 16th century copy of a 12th century map made by Arabic cartographer Muhammad al-Idrisi for the Norman King Roger II, and a funerary inscription installed by the Christian priest Grisandus for his

mother Anna in 1149. It features the eulogy in four different languages (well, three and a half): on top is Arabic written in Hebrew script, the left in Latin, the right in Greek and Arabic in actual Arabic on the bottom. The multilingual approach was common in Norman Sicily, with public inscriptions often written in several languages.

The exhibition runs through August 14th. If you aren’t likely to make it London in time (or even if you are, really), you’ll enjoy this behind the scenes look at some of the more spectacular objects in the exhibition guided by curators Peter Higgs and Dirk Booms.

And now, an avalanche of beautiful pictures. 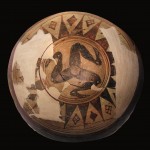 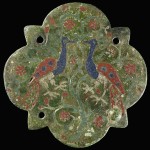