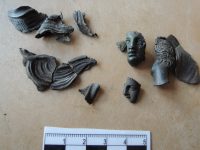 Archaeologists have discovered pieces of an ancient Greek bronze breastplate at a Celtic sacrificial site in Slovakia. Found near the village of Slatina nad Bebravou in western Slovakia’s Trenčín Region, the fragments of finely crafted relief were originally part of the shoulder boulders of an elite warrior’s breastplate.

Professor Regine Thomas from Cologne University analysed the parts of the found breastplate.

She worked out a special analysis by digitizing small pieces of the shoulder boards. Through this method she succeeded in reconstructing the Hellenic scene decoration.

“It was a so-called Amazonomachy, a portrayal of the mythical battle between the Ancient Greeks and the Amazons, a nation of all-female warriors,” explained [deputy director of the Slovak Archaeological Institute in Nitra, Karol] Pieta, as cited by SITA.

They are the oldest Greek artifacts ever discovered in the area, and they were already old when they first arrived there. The breastplate was manufactured in the Spartan Greek colony of Taras (modern-day Taranto, in Puglia, the inner heel of Italy’s boot) in the 4th century B.C., the time when the city reached the apex of its cultural, political, economic and military influence. It was the most powerful city in Magna Grecia and was famed for the beauty and detail of its silver coins and pottery.

While Tarentum’s commercial and trade reach was extensive in the 4th century B.C., it did not likely reach Slovakia. The military nature of the object suggests it was taken as a war prize, something the Celts who inhabited the find site would have had ample opportunity to do a hundred years later.

“There is a justified hypothesis that Celtic warriors, who at that time were moving to the area of middle Danubeland, brought those bronze reliefs here. Theoretically, it is possible that the discovery was stolen from the Delphi oracle, which Celts plundered in the first half of the third century BC,” said Pieta for SITA. 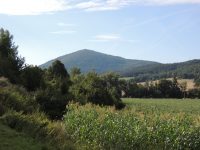 The bronze reliefs were unearthed at a spot used by ancient Celts for ritual purposes. It is less than a mile from a Celtic fortified settlement on Udriana Hill. There is ample evidence of sacrifices having taken place at the site in the late 3rd century B.C., particularly burnt offerings of animals, objects and valuables. Most of the artifacts found there were burned in antiquity.

Archaeologists also unearthed a sacrificial hole, a pit where the blood of sacrificed animals, possibly including human ones, trickled down. Burned animal bones have been found there, as well as burned human bones. Jewelry, horse fittings and metallic clothing decorations were also found in the pit.

The most numerous objects were fragments of ceramics. Archaeologists believe these are the remnants of ritually smashed beverage vessels. The beverage was used at the feast celebrating a sacrifice, and as soon as the fluid was drunk, the containers were thrown on the fire, smashing it into pieces.