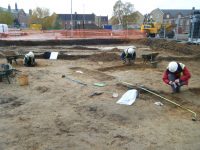 DNA analysis has confirmed for the first time the presence of family members buried in a Roman cemetery. University of Essex scientists have tested bones found in the Butt Road cemetery in Colchester, a late Roman burial ground that is one of two located outside the walls of the first colonia (city settled by retired Roman soldiers) in Britain, and determined that they were, as suspected, biologically related to each other.

The cemetery first saw use in the mid-third century A.D., its 61 graves oriented north-south as was customary in traditional polytheist burials. In the fourth century, the cemetery transitioned to Christian burials, with at least 620 inhumations (some overlapping the earlier pagan graves) oriented east-west containing no grave goods. A building at the northwest of the cemetery dating to 320-340 A.D. was probably a church and/or a martyrium. Its construction coincides with the relatively abrupt shift to Christian burials at the cemetery.

Around the middle of the fourth century, six timber vaults were built in the cemetery. They contained double and single burials. Also from this period are several plaster burials and three lead-lined coffins, two of them decorated with early Christian symbols. Other burials were clustered around the vaults, primarily two vaults labelled I and II which had more than 30 later inhumations densely packed around them. The presence of multiple infant burials is further evidence of Christian funerary practices. 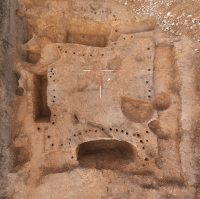 The spatial relationships of the burials and osteological analysis of the skeletal remains led the archaeologists who first excavated the Butt Road cemetery between 1976 and 1988 to hypothesize that these were probably family groups, but it could not be scientifically verified with the technology available at the time. In order to maximize optimal conditions for DNA extraction and analysis, archaeologists needed to re-excavate in the areas cemetery believed to be family burials and remove human remains under DNA-free conditions to minimize the chances of contamination.

The Colchester Archaeological Trust excavated the Butt Road site and University of Essex scientists successfully extracted DNA samples from the femurs of 26 individuals, most of them from vaults I and II and the densely packed burials around them. Two middle aged men buried next to each other in the vault complex were found to be kin, either father and son or brothers. A young adult woman and two infants buried near her were likely related, possibly a mother and her two babies. There were also another pair of possible brothers, a possible brother and sister or cousins or uncle and niece.

Studies of ancient DNA usually determine relationships by looking at mitochondrial DNA (mtDNA). Relationships can also be determined using HLA (human leukocyte antigen) typing which shows how closely the tissues of one person match the tissues of another person and is an effective indicator to show if someone is related. Using both approaches, the scientists found that the individuals buried within the vault complex at Butt Road were interrelated and were most likely from Roman descent.

The results also throw some light on Christian funeral practices in Roman Britain. Most of the sampled graves which were arranged around the pair of vaults are interpreted as ‘focal graves’. The results indicate that family burials could be an important focal burial characteristic, with the associated family groupings perhaps representing people of privilege within the community.

Professor Fernández said: “In recent years, aDNA analysis has breathed new life into archaeology as it is such a powerful research tool. It means that we have been able to for the first time scientifically prove the long-held theory that there were family burial areas at the Butt Road Roman cemetery by showing they shared the same inherited genetic markers.”

The results of the study have been published in the journal Frontiers in Genetics and can be read in full here.