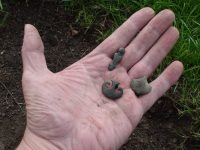 Numerous Roman military artifacts dating as far back as the 1st century A.D. have been unearthed in Kujawy, north-central Poland, a region in the Vistula basin far outside the boundary of imperial Rome even at its greatest extent under Trajan in the early 2nd century. This is a find that could rewrite history, and it came about thanks to looters’ terrible understanding of true archaeological value.

Researchers from the Institute of Archaeology of the University of Warsaw were working on a study of the movement of peoples during the Migration Period, specifically looking for evidence that some Germanic settlements may have survived the upheaval and remained populated until the Slavic invasion. Part of the research involved looking through material given up by looters as trash of no interest to them. The team had to sift through buckets full of artifacts — sheet metal, coins, musket balls, lead shot — still caked with mud.

Among the buckets of assorted stuff, Dr. Bartosz Kontny discovered a piece of metal that looked a lot like a fitting from a Roman cavalry horse’s bridle. He set it aside, dampening his excitement by reminding himself that such artifacts aren’t found in Poland. Then he found another. And another. Soon he had a right pile of fittings, all of Roman origin. More Roman military artifacts followed, like 1st century latch buckles and bullae from the cingulum militare (a belt with hanging leather straps studded with rivets).

The bullae date to the late empire (4th century, early 5th century A.D.) and could be explained by barbarian recruits returning home with their gear after serving in the Roman army, but the much earlier cavalry fittings and buckles could not be explained so easily. Given the enormous significance of these objects, archaeologists arranged an official excavation of the area between the villages of Gąski and Wierzbiczany, where the looters reported having made most of the finds.

Among the unique monuments are metal pendants that decorated the straps of the Roman horse gear. They were in the shape of phalluses or vulvas (female womb). “These amulets were believed to ensure happiness and protect against evil forces, they had apotropaic meaning” – said Dr. Kontny.

As a truly unique object among the analysed artefacts, the archaeologist mentions a gold-plated copper [fitting] for a hip belt. It depicts a spear of a beneficiarius, a high-ranking officer of the Roman army. “It was an attribute of his power” – says the archaeologist.

Such a large accumulation of similar Roman objects in other places in the barbarian Europe – for example in central Germany (where, for example, the local population was recruited to the legions) is clearly associated with physical Roman presence.

The beneficiarius was an officer of rank and importance in the Roman army. He could command an advance unit or direct intelligence missions. If there was one in Poland, he wasn’t just passing through to enjoy the charms of the Vistula. Fittings like the one found in Kujawy have been found inside the boundaries of the empire with only two exceptions, and they were in Germania. Where a beneficiarius was dispatched, troops were dispatched with him. He was a commander, not a lone wolf. 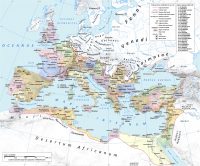 Just to give you an idea of the distances involved, to the right is a map of the Roman Empire in 125 A.D. in the reign of Hadrian. The red dashed line is the imperial border. Kujawy is on the west bank of the crook of the Vistula in the territory of the Goths, Burgundians and maybe the Lugii (it’s not clear where exactly their lands were as they’re rarely referenced by Roman historians and geographers, and when they do get a mention they are described in different terms at different periods). The artifacts were unearthed about 20 miles southwest of where the bend straightens out, hundreds of miles from the imperial frontier.

According to historian Cassius Dio, Roman cavalry may have made in appearance in what is now Kujawy in the late 1st century, and it was the Lugii themselves who called said cavalry. Around 91 A.D., they made an alliance with Rome and asked the emperor Domitian to send troops to aid in their fight against the Suebi. Domitian agreed in a desultory fashion and sent a measly 100 horsemen. Dio does not mention them any further, so there’s no way to know if they arrived, fought, returned or anything else. The territory of the Lugii, as far it can be determined, seems to have extended further to the south of modern-day Kujawy, so even if the horsemen went to their aid as promised, they could well have been a long way away from the find site. If they did make it, they would be the first Roman soldiers recorded in what is today Poland.

One key clue that might explain the finds is that the area is located directly on the Amber Road which went from the Baltic south along the Vistula, following that crook before cutting due south overland to the Varta river, then continuing southbound over river and land routes until reaching the Roman Empire at Carnutum in Pannonia (modern-day eastern Austria). Romans loved them some amber, so it’s conceivable that there might have been some kind of military presence to secure the route. Pliny mentions Nero sending a trading expedition to the Baltic, but nothing about a military escort. Still, a highly valued trade route winding through the territories of many and varied tribes with little political stability and a tendency to engage in hostilities could certainly have used some securing. The Kujawy might be evidence that Rome sent legions to keep the amber coming.

None of the artifacts were found in the graves of local people, so it’s unlikely they were random bits of pillage or trade. The sheer quantity of the fittings strongly indicates the presence of the Roman military in the area and is the earliest archaeological evidence of Roman troops in what is now Poland.