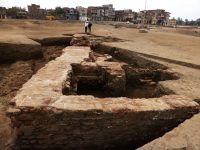 A large building from the Greco-Roman era has been unearthed at an ancient site near the village of Sa El Hagar about 75 miles north of Cairo. The red brick structure may have been part of a bath complex. Other artifacts recovered by the mission include a number of pottery vessels, terracotta figurines, a statue of a ram, bronze tools and a fragment of a hieroglyphic relief.

Some coins were also unearthed, one of them of particular note. It’s a gold coin in excellent condition depicting the crowned profile of King Ptolemy III on the obverse and the Land of Prosperity on the reverse. It was minted during the reign of his son Ptolemy IV (244 – 204 B.C.) as a memorial to his predecessor. It weighs 28 grams (one whole ounce) and is just over an inch in diameter.

Known as Sais by the ancient Greek, the city has a fascinating history. It is thought to have been a cult center for the worship of the war goddess Neith as early as the 1st Dynasty (ca. 3100 B.C.), but almost all of the early dynastic remains were destroyed by farmers who used the ancient mud bricks to make fertilizer. Archaeological evidence from its heyday as the capital of the 24th and 26th Dynasties has survived. One inscription documents the presence of a medical school for women at Sais’ Temple of Neith. The pharaohs ruled from the royal palace at Sais until the Persian invasion in the 6th century.

Greek chroniclers and philosophers put Sais at the nexus of their own and Egyptian mythologies. They identified Neith with their warrior goddess Athena. Herodotus claimed that Osiris died there. Diodorus Siculus said the city was built by Athenians in the mists of time before the great deluge sent by Zeus to punish people for their constant wars. Plato wrote that the Athenian statesman Solon was told the story of Atlantis by an Egyptian priest in Sais.

Jean-François Champollion visited Sais in September of 1828 on his second expedition to Egypt, the first since his groundbreaking 1822 translation of the hieroglyphics on the Rosetta Stone. He wrote in a letter that, funds permitting, he planned to come back to Sais to excavate it, but those plans did not come to fruition. He died unexpectedly in 1832 at the age of 41 and never did return to Egypt. Some Egyptologists believe that the Rosetta Stone was originally part of the great temple at Sais which was destroyed in the 14th century. Parts of its inner chamber were moved to Rosetta and Cairo, so it’s possible albeit unprovable.