Archaeologists have discovered an intact 4,000-year-old cremation urn on a farm in Cornwall. Found less than 10 inches beneath the surface, the clay urn is unbroken and still contains ashes and what appear to be fragments of charred human bone.

The team, led by Australian National University (ANU) archaeologist Catherine Frieman, unearthed the earthenware vessel dating to the Bronze Age during a two-week dig in a field near the town of Looe. The farmers told them the site had been extensively cultivated when they were children and for generations before that, so nobody expected to find a great deal of intact archaeological material, much less an urn buried there 4,000 years ago that managed to duck untold decades of ploughing.

“We were so excited to find such a lot of archaeology on the site despite scores of generations of ploughing, but to find an intact clay urn buried 4,000 years ago just 25 centimetres beneath the surface is nothing short of a miracle,” said Dr Frieman.

This and other evidence from the site has led her to conclude there was most likely a large mound over the burial which existed from prehistory well into the middle ages protecting the centre of the barrow.

“This is a sealed, intact cremation so it has the potential to tell us a lot about the cremation rite as it was practiced 4,000 years ago. We also appear to have some identifiable fragments of bone among the cremated remains so we’ll potentially be able to tell a lot about the individual themselves,” she said.

“We’ll be able to say what gender they were, possibly their age, or an age range, and depending on the bone preservation we can conduct analyses to examine where they were from, what their diet was like, where this food was coming from and what they ate and drank as a child when their teeth were forming. This is a very beautiful, very complete burial, and we’re very excited,” she said. 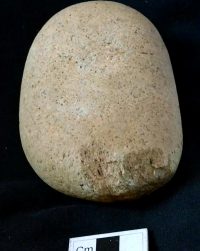 Other Bronze Age objects have been found in the dig: some pottery, small flint tools and two hammer stones that were used to chip flint flakes off larger pieces to shape and edge tools and weapons. A number of Bronze Age shipwrecks have been found off the coast of southeast Cornwall, so it seems this area was a well-trafficked trade route going back to prehistory.

The analysis of soil, pollen, flint and other samples is underway but it will probably be a year before a comprehensive story of the find is possible.