They are supposed to helping broker a conflict between Morocco and the Polisario independence movement in Western Sahara. Evidently that leaves them a lot of free time to take spray cans to prehistoric engravings at the rock art site at Lajuad.

The most dramatic example of this is at Lajuad in the Southern Sector of the Polisario-controlled zone, where MINURSO recently installed some communications hardware on the inaccessible (except by helicopter) summit of a smooth granite hill. It appears that the MINURSO personnel responsible for the installation amused themselves by spray-painting their names on the wall of a rockshelter that is also an important archaeological site (see photos). Although the paintings and engravings in this shelter are somewhat faint, it is difficult not to notice that the wall defaced by the MINURSO personnel houses ancient paintings and engravings, as does the floor of the shelter.

See those zig-zags like on Charlie Brown’s shirt with the lines dropping down? They’re faint already on account of they’re thousands of frikkin’ years old. Ahmed’s stupid frikkin’ tag sure doesn’t help matters.

It’s not the first time the rock face has been scribbled on — some of the graffiti goes back to the beginning of the 20th century — but these scrawls are huge and they were done by people who were supposed to be there to help. Now UNESCO has to clean up the mess their colleagues in the UN made.

Joseph Romito, armed solely with a hobbyist’s interest in John C. Calhoun and his multi-volume set of Calhoun’s correspondence, caught one Daniel Lorello in the act of selling a letter purloined from the New York State Archives on eBay.

“I didn’t know what was going to happen,” Mr. Romito said. So he bid on the item himself. “I knew I wasn’t going to end up buying it — I wasn’t going to pay for it — but I put in what I thought was a very high bid to try and keep it from going somewhere else. The government can be slow.” […]

Last Tuesday, the day the auction was to end, bidding for the letter stood at $274 before Mr. Romito took matters in his own hands and indicated that he was willing to go as high as $1,777.77, should a bidding war break out.

At 8:55 p.m., with five minutes to go, a member of the attorney general’s office took up Mr. Romito’s tactics and began bidding for the item — only to be automatically outbid by Mr. Romito. Finally, a bid of $1,802.77 stuck, and the government was declared the winner.

Turns out, Mr. Lorello has been funding his daughter’s credit card excesses with the theft hundreds of rare books and documents, ranging in value from 10 bucks for some crappy stuff to $3,000 plus for a rare “Davy Crockett’s Almanack”. Most of the missing items have been found in boxes at his home, thankfully.

The last line of the NYT is gold: “Most of the artifacts were known among dealers as trash, he wrote, although he used a trashier word than trash.” :giggle:

Unveiled Monday by the Israel Antiquities Authority, the restored mosaic was found in 2005 during the excavation of Bird Palace in Caesarea, Israel. The gleaming panel of traditional glass and rare gold tesserae appears to be of Christian origins, and somehow survived the destruction of the palace in astonishingly good condition.

Yael Gurin-Rosen, head of the IAA’s glass department, said that the mosaic panel is the first of its kind to be excavated in Israel, and due to the quality of its preservation, given its age, and its gleaming, gilded craftsmanship indicating Christian origins, it is most likely the only one in the world.

“It’s a unique find, a piece of art,” Joseph Patrich, professor of Archaeology at the Hebrew University in Jerusalem. “It’s in its original state,” Patrich said, “because the panel fell face down, protecting its green, blue and gold facade from debris and damage.” 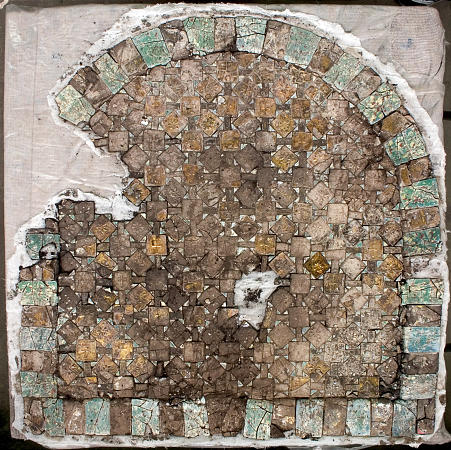 The new season of the only shows on the History Channel that doesn’t make me mad, Cities of the Underworld, starts tonight at 9:00 PM EST. It’s basically an urban spelunking program, in which some hip five o’clock shadow and jeans type gets a guided tour of cities beneath street level.

Under Edinburgh there’s a whole scary vault city. Even today, long empty of the literal underclass which once packed its rooms, it still reeks of illegal distilleries, destitution and communicable diseases. That was totally my favorite episode.

Tonight they’ll be exploring the urban underbelly of Jerusalem, which is bound to be a far cleaner experience than the nastiness all the other channels are offering.

Irbil, capital of the autonomous Kurdish region of Iraq, has a citadel. A citadel which has been continuously inhabited for 8,000 years. A citadel just 20 miles away from where Alexander the Great finally defeated King Darius in 331 B.C. A citadel on the verge of collapse.

The Kurdish government, in conjunction with a Czech restoration company and a variety of NGOs, has crafted a plan to restore this gem before it’s too late.

Little is known about the early inhabitants of Irbil but the citadel’s secret is water – an abundant supply has maintained civilization after civilization.

The site “is a rich historical repository holding evidence of many millennia of habitation, more than 8,000 years old, making it the longest continuously inhabited site in the world,” said UNESCO’s Djelid.

The citadel sits atop a roughly 30-metre-high mound formed by layers of successive settlements, including Assyrians, Akkadians, Babylonians, Persians and Greeks.

They need $35 million to get started, though, and right now the kitty is at zero. Here’s hoping the wondrous rare beauty and historical importance of this site inspires a flood of donations.