The New York Public Library turns 100 years old this year, and now that a three year, $50 million dollar restoration is complete, it can celebrate in gleaming high style. 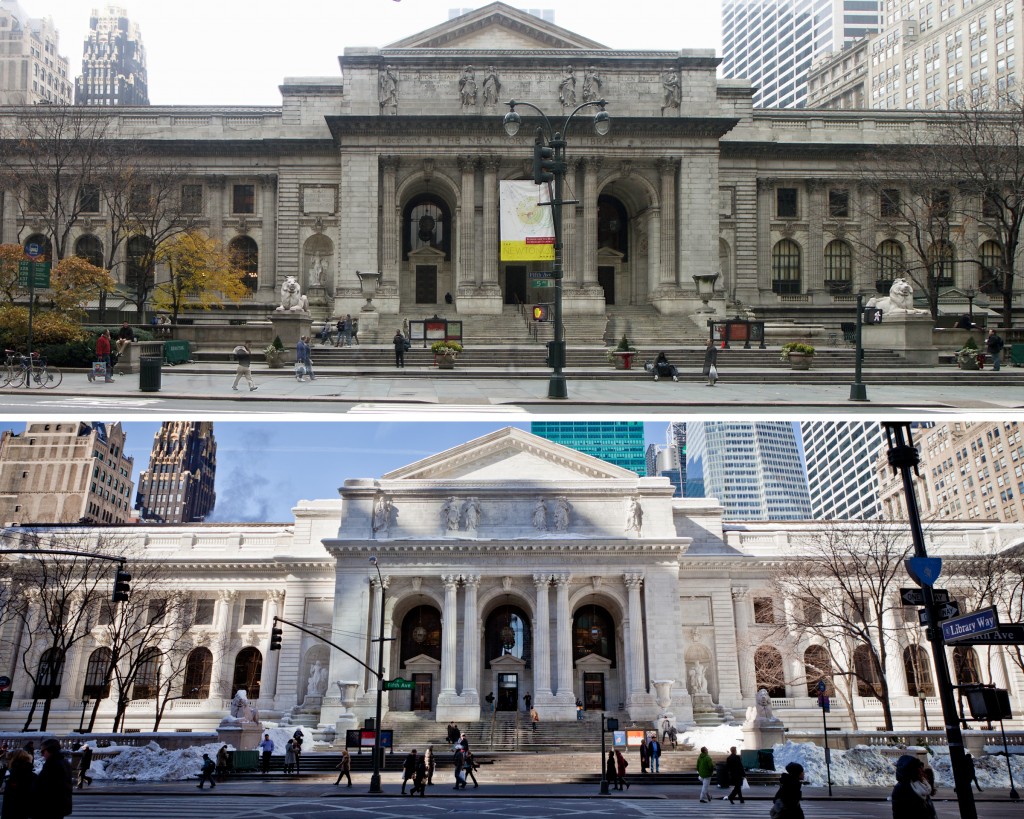 The Stephen A. Schwarzman Building was completed in 1911, and was instantly lauded as a Beaux Arts masterpiece and an emblem of American populism. What would have been a fit abode for royalty in Europe in the United States was a library, a public palace open to all. New York City is hard on marble, though, and over the years the facade began to deteriorate, more so than people realized until conservators assessed the structure before restoration began.

A survey of the building’s condition by [architectural firm Wiss, Janney, Elstner Associates] in preparation for the Centennial revealed severe deterioration and soiling of the façade, particularly in areas such as the Corinthian column capitals, lion head keystones and scroll modillions. The survey also revealed roof damage, severe oxidization of the building’s bronze doors and window casings, and cracking, surface loss and other problems with the sculptures, including the six colossal figures by Paul Wayland Bartlett over the columns, and the two fountains by sculptor Frederick MacMonnies, who also carved the Washington Square Park Arch and the Nathan Hale statue in City Hall Park.

Actual restoration began in 2008. Repairs included installing over 2,000 individually carved marble stones – called dutchmen – to replace damaged pieces of the façade. These replaced elements – such as the noses and chins of the lion head keystones – were carved by Master Stone Carver Shi-Hia Chen of B & H Art-In-Architecture Limited. All of the sculptures – originally carved by a series of famous artists – were repaired under the watchful eye of Mark Rabinowitz at Conservation Solutions, the fine art conservation consultant.

All told, over 7,000 instances of deterioration in the 150,000-square-foot façade were repaired, including 1,000 cracks sealed, 900 marble balustrades repaired, 350 bronze windows restored, as were the roof and the bronze doors. The Vermont marble of the entire façade was cleaned, using 200 gallons of concentrated soap. As NYPL President Paul LeClerc puts it, now it “gleams like an alabaster palace.”

For those of you as obsessed with before and after pictures as I, you’ll enjoy the NYPL Facebook picture gallery of the restoration.

Also, here’s video of the ribbon-cutting ceremony including a fascinating description of the restoration process by architect Tim Allanbrook of Wiss, Janney, Elstner Associates. That starts at the 6:50 mark and is not to be missed.