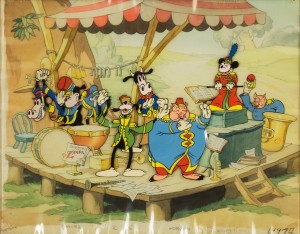 A hand-painted animation cel from Mickey Mouse’s first color adventure will be sold at Heritage Auction’s Comics and Comic Art Auction on February 24-25. This same cel went for $420,000 in a private sale in 1999, still the record for the most expensive animation cel ever sold.

The cel is from 1935’s “The Band Concert” in which Mickey attempts to conduct Goofy and a variety of other characters in a rousing performance of “The William Tell Overture.” Circumstances — a wind storm, a bee, Donald Duck trying to mess them up by playing “Turkey in the Straw” on a piccolo — conspire to make this challenging, but the band plays on undeterred. The reason this particular animation cel is so valuable is that it is the only production setup in existence to feature Mickey and the full band.

This charming and beautiful cel set-up shows Mickey and company at the beginning of the cartoon, greeting their audience. It’s the “pie-eye” Mickey at his best, and this incredible scene has never looked better. Professional restoration has been done by Ron Stark of S/R Laboratories. The image area measures approximately 12″ x 9.5″, professionally matted and framed to an overall size of 26.75″ x 22.75″.

The seller is Kerby Confer, a Maryland radio executive with an extensive and top quality collection of original Disney pieces. He bought it in 2001 for an unknown sum (maybe he already broke the $420,000 record in the 1999 sale). Heritage Auction has put an extremely conservative $100,000 estimate on the piece

Animation cels (short for celluloid, even though by 1935 they were actually made out of cellulose acetate which doesn’t burst into flame quite so readily) are transparent sheets onto which animation characters were painted. They were then overlaid onto a static background. This allowed studios to create an assembly line of different teams of artists working on characters in the same scene. Disney stopped using cels in 1990, replacing them with computer animation. The Little Mermaid was the last of her kind.