Good news for tourism and the many Egyptians employed in the industry: Egypt’s archaeological sites and museums will re-open to the public Sunday, February 20th. In not so good news, though, looting and thefts during the anti-government protests were more prevalent than first realized.

Zahi Hawass has come under fire for claiming early on that no artifacts were stolen from the Cairo Museum during the break-in of January 28th. That turns out to have been false information since once museum curators did a complete inventory, 18 artifacts were found to have been stolen, including two gilded wood statues of King Tutankhamun and several other pieces from the Tutankhamun display.

The missing Heart Scarab of Yuya was recovered on the west side of the museum gardens, near the new bookshop. Wooden fragments belonging to the damaged New Kingdom coffin, still on the second floor of the museum, were also found in this area. The search team also found one of the eleven missing shabtis of Yuya and Thuya underneath a showcase. Fragments belonging to the statue of Tutankhamun being carried by the goddess Menkaret have been found; all the located fragments belong to the figure of Menkaret. The small figure of the king has not yet been found.

Dr. Hawass said it seems the looters dropped objects as they fled, and every inch of the museum must be searched before the Registration, Collections Management, and Documentation Department, which is overseeing the inventory, can produce a complete and final report of exactly what is missing. 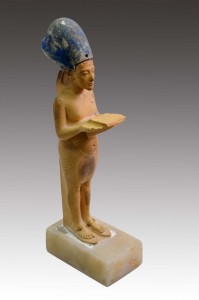 Thankfully four of the 18 have now been recovered, including the most valuable piece: a limestone statue of the Tut’s father, Pharaoh Akhenaten making offerings to the gods. Akhenaten was reviled after his death and his memory erased — cartouches with his name and statues with his likeness were destroyed — so this is a very rare surviving statue.

It was found by a 16-year-old boy near a garbage can in Tahrir Square. He was there protesting against the Mubarak regime. When he found the statue, he brought it home and his mother called her brother, a professor at the American University in Cairo. The brother, Dr. Sabry Abdel Rahman, called the Ministry of State for Antiquities Affairs and returned the statue last Wednesday.

It appears to be in good shape. Akhenaten was holding an offering table in his hands and that’s been removed, but the table was found earlier still on museum premises. This statue is slated to be the first piece restored.

At Saqqara, the tomb of Hetepka was broken into, and the false door may have been stolen along with objects stored in the tomb. I have arranged for a committee to visit the tomb this coming Saturday to compare the alleged damage with earlier expedition photos. In Abusir, a portion of the false door was stolen from the tomb of Rahotep. In addition, break-ins have been confirmed at a number of storage magazines: these include ones in Saqqara, including one near the pyramid of Teti, and the magazine of Cairo University. I have created a committee to prepare reports to determine what, if anything, is missing from these magazines. The Egyptian Military caught and released thieves attempting to loot the site of Tell el Basta; the military also caught criminals trying to loot a tomb in Lisht. There have also been many reports of attacks on archaeological sites through the building of houses and illegal digging

Hawass is under a great deal of pressure right now, not just because of the damage and thefts, but also because there have been strikes demanding better jobs and decent pay, protests against his iron rule and corruption in the antiquities ministry. Although protesters asked for his resignation, Hawass has of course refused. “They say, ‘If you cannot give us a job, leave your job’—I cannot leave my job for some kids in the street,” he said. “If I feel one day that I’m not doing something good for my country, I will resign.”