Archaeologists excavating one of the last standing Inca citadels in the Andean jungle region of Cuzco, Peru have discovered nine tombs from the pre-Incan Wari culture. Some Wari artifacts were first found last July; then over the next three months the tomb complex was discovered and finally announced to the public Wednesday.

One of the tombs includes gold and silver burial goods which mark it as having belonged to a person of high status. Archaeologists have dubbed him the “Lord of Vilca” in a nod to the Lord of Sipán, the Moche aristocrat whose intact burial (from ca. 100 A.D.) was found in northern Peru in 1987 still full of jewelry, art and precious metals. The Lord of Vilca was buried with a large Y-shaped silver chestplate, a silver mask, two gold bracelets and two walking sticks laminated with silver.

The Wari civilization flourished between 600 and 1100 A.D., 300 years before the Inca built the largest pre-Columbian empire on the continent. The Lord of Vilca’s tomb dates to right in the middle of that range, around 1000 A.D.

The tombs are within the archaeological complex of Espiritu Pampa, in the Cuzco district of Vilcabamba, some 1,100 kilometers (680 miles) south-east of Lima.

Vilcabamba was the last refuge of Inca resistance after Spanish conquistadors captured and executed the Inca emperor in 1532. The last resistance leader, Tupac Amaru I, was captured by the Spaniards after fleeing the site and executed in 1572.

“This will make us revise part of Inca history.”

Historians previously thought the Wari civilization had reached Cuzco, but only up to the mountainous sierra. The Espiritu Pampa jungle region where Vilcabamba is found was thought to have been inhabited only by the Incas. It might suggest a closer link between the rise of the Inca Empire and its Wari predecessor.

Wari burial complexes are always found inside cities and were part of complex formal funerary rites. They don’t yet know the exact dates and extent of the citadel in which the tombs were found, but the burial complex covers an area of 450 square meters (about 4,844 square feet).

Add this find to the 2008 discovery of a Wari city in Chiclayo, way up north, and the enormous reach of the culture becomes unmistakable. They covered almost the entire length of modern Peru and more than halfway inland. 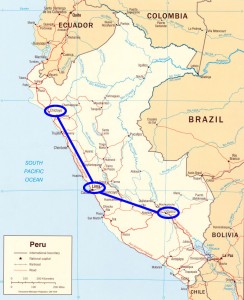