The AP reported on Thursday that the false beard on the gold funerary mask of Tutankhamun, probably the single most recognizable ancient artifact in the world, had come off and was reattached with a sloppy mess of irreversible epoxy glue. Cited in the article are three conservators at the Cairo Museum, all unnamed due to fear of reprisals, who had different stories about what happened to the beard — it was either knocked off when the mask was mishandled during cleaning of the display case or deliberately taken off because it was loose — but agreed that it was reattached hastily with epoxy.

By their accounts, museum officials ordered the beard reattached as quickly as possible because obviously it’s a massive tourist draw and they didn’t want it taken off display for any length of time. Epoxy dries almost instantly while a cautious conservation approach would use an adhesive that dries slowly over the course of at least 24 hours so adjustments could be made if necessary. It would also be reversible to allow future conservators to remove it if necessary without damage to the artifact.

“Unfortunately he used a very irreversible material — epoxy has a very high property for attaching and is used on metal or stone but I think it wasn’t suitable for an outstanding object like Tutankhamun’s golden mask,” one conservator said.

“The mask should have been taken to the conservation lab but they were in a rush to get it displayed quickly again and used this quick drying, irreversible material,” the conservator added.

The conservator said there is now a visible gap between the face and the beard. “Now you can see a layer of transparent yellow.”

There are also visible scratches. A conservator says he witnessed a colleague scrape dried epoxy from the mask with a spatula leaving scratches on the gold. Steel yourself for the picture. 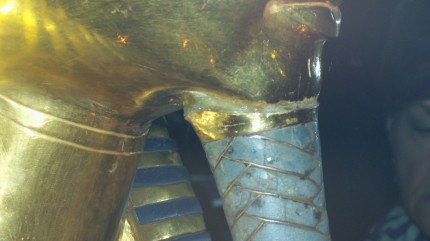 The AP secured a photograph from a tourist named Jacqueline Rodriguez who was at the museum on August 12th, 2014, and took a picture of a museum worker holding the beard in place waiting for the glue to set.

The director of the Egyptian Museum Mahmoud Halwagy denied that there had been an accident damaging the mask, but it was a very weak, CYA denial that “no damage had occurred to the mask since he took over leadership of the museum last October.” He did admit that the thick, gross layer of epoxy is “very visible” (making sure to note that it could have been applied before his arrival) and that he has a committee of experts working on a report.

Qatari news site Al-Araby Al-Jadeed has a different take on the disaster that it published on the same day as the AP’s story. I suspect they were the first to break the news because they have boots on the ground, so to speak. (Before the AP, that is. There were rumblings in the Egyptian press as early as November that conservators had sent a memo to the Antiquities Minister demanding “immediate investigations regarding the odd appearance of the mask after the restoration work it encountered in August.”) They sent reporters to the museum on a tip about the botched repair. Al-Araby reporters found the lighting in the room unusually dim but they were able to detect despite the penumbra that there was a thick line of glue visible and scratches on the left side of the mask. Their sources told them that the mask was damaged during cleaning in October, not August, and that the beard was reattached in the conservation lab, not in front of visitors.

“After the expert restorer Abd al-Latif glued on the false beard it was obvious that it no longer appeared the same. The adhesive had spread to the sides of the mask and it was clear that there was further damage,” the witness said.

“A couple of weeks later the adhesive on the mask was noticed and a number of curators complained about what had been done.

“So the head of the conservation department removed the glass display case, with the approval of the museum director, and removed the epoxy resin from the sides by using a metal scalpel. This is what scratched the mask.”

The source says that after this, the museum director Mahmoud al-Halwagi ordered the lights in the mask room to be dimmed.

Halwagy denied to Al-Araby that the mask was ever damaged. He blames disgruntled employees angry over a department shakeup for making up stories. When Al-Araby pointed out they have a picture of the beard looking like it was glued on by kindergarteners, Egyptian antiquities department head Yusuf Khalifa said that could have been a picture of a replica, a deception perpetrated by biased sources.

Not surprisingly, the story exploded on social media. Most of the reactions are outrage at the shoddy work, but Al-Araby is seen by some as having a pro-Muslim Brotherhood bias, so neither its story nor the AP’s are considered reliable by pro-government Egyptians on Twitter and Facebook. Monica Hanna, an archaeologist with Egypt’s Heritage Task Force, went to see the mask in person and is mad as hell. Her Twitter account is very much worth following to keep abreast of the developments.

Hanna told the AFP that Egypt’s Heritage Task Force is going to file a complaint with the public prosecutor. There’s a law in Egypt against destruction, damage, defacement or alteration of antiquities. Anyone convicted of taking part in such activities will be sentenced to five to seven years in jail and fined between 3,000 ($400) and 50,000 ($6,700) Egyptian pounds.

So that’s where things stand as of now. The Antiquities Minister is apparently planning an urgent press conference to address the situation, although I’d be stunned if any actual information, as opposed to denials and justifications, came from it.

Finally, after reading/viewing a metric ton of news about this debacle, I am compelled to dedicate special opprobrium to CNN for this absurdity of a report. The laughter, fixed smiles, the omg-aren’t-word-stumbles-hilarious digression and the ridiculous and offensive comparison of a cultural patrimony calamity to a viral joke make me want to outspit a llama.