Ohio’s Toledo Museum of Art was looking for a Neoclassical chandelier to adorn Gallery 31, a room in which paintings from the period, like Napoleon on the Battlefield of Eylau made by Antoine-Jean Gros in 1807 and a smaller 1786 version of Jacques-Louis David’s famous Oath of the Horatii, one of the works that launched the Neoclassical movement, feature prominently. They were able to acquire a chandelier from a Hamburg art dealer, Frank C. Möller Fine Arts, that fit the bill most perfectly because not only is it inspired by classical architecture, it was made for Napoleon’s youngest brother, Jérôme Bonaparte.

The Spiral Chandelier, made by Berlin luxury craftsmen Werner & Mieth, has a skeleton of gilded bronze hung with glass pendants. It is about five-and-a-half feet tall by three feet wide and is in exceptional condition, with the metal armature and almost all of the pendants original to the piece. The white glass pieces are replacements created from a photograph of another Werner & Mieth chandelier ordered by Jérôme Bonaparte for one of his palaces that was sadly destroyed by bombs during World War II. 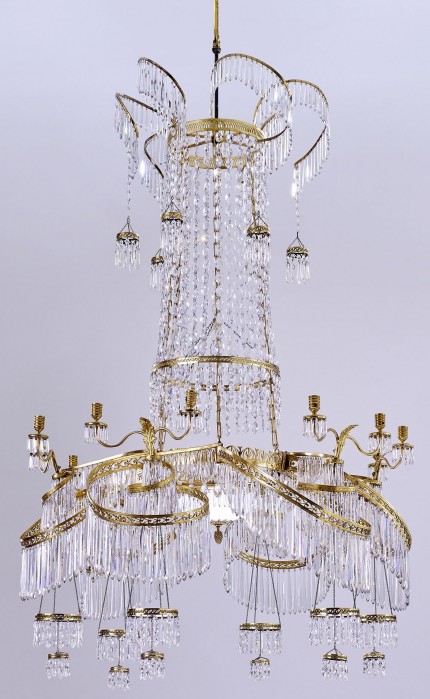 The Werner & Mieth company, founded in 1792 by Christian Gottlob Werner, Gottfried Mieth and Friedrich Luckau the Younger, was for more than four decades the most important Berlin manufacturer of handcrafted luxury decorative items in gilded bronze, including chandeliers, table centerpieces and candelabras. Their specialty was ormolu, a gilding technique that applied a finely ground mixture of gold and mercury to mercury-treated bronze, copper or brass and then fired the object at a temperature high enough to evaporate mercury, leaving only the gold bonded to the metal. The result was a shiny, bright gilded surface and, importantly for mantel clocks, fireplace tools and chandeliers, non-oxidizing even when exposed to high heat.

The company was immediately successful. In 1794, just two years after opening their doors, Werner & Mieth were given a Royal Appointment. Their chandeliers appeared in all the Hohenzollerns’ great palaces — the Monbijou Palace and Crown Prince’s Palace in Berlin, the Japanese Palace in Dresden, Sans-Souci in Potsdam. King Frederick William II of Prussia, grandson of Frederick William I, nephew and heir to the childless Frederick the Great, in 1797 had 12 Werner & Mieth chandeliers installed in the east wing of Charlottenburg Palace, six in his winter chamber upstairs and six in his summer apartments on the ground floor.

The nobility and aristocracy of other countries followed suit. Even during the upheavals of the Napoleonic wars (Frederick William III was defeated by Napoleon’s armies at the Battle of Jena-Auerstedt in 1806, after which Prussia was carved up and occupied by French troops; its territories and autonomy were fully restored after Waterloo), Werner & Mieth thrived. France, long culturally dominant in the ormolu crafts, imported the Prussian company’s luxury goods. Various members of the Bonaparte family were clients, among them the Empress Josephine herself. In 1810, Werner & Mieth exported chandeliers to capitals of Europe — Paris, London, Stockholm, St. Petersburg, Copenhagen — and as far as Constantinople.

Jérôme Bonaparte got on the chandelier bandwagon that year too. Napoleon had made his youngest brother King of Westphalia, a conglomeration of a bunch of northwestern German states, in 1807. One of those statelets was the principality of Brunswick-Wolfenbüttel whose seat was Brunswick Palace in the city of Brunswick. In 1810, Jérôme Bonaparte ordered a Werner & Mieth chandelier inspired by the volutes of the Greek Ionic order of columns (see the swirls on the capital). The company thought this particular model, designed by artist and self-taught architect and archaeologist Hans Christian Genelli, was the most beautiful in their catalogue. Genelli wrote notes on Vitruvius’s De Architectura and drew sections of the Ionic volutes from a much-studied passage in which the great Roman architectural theorist discusses the design of the spirals.

The top ring of the object has six spirals evenly spaced around its perimeter, densely hung with glass drops, which terminate in small suspended rings with glass drops. Curtains of faceted circular beads obscure the central spine, terminating in an opaque white glass receiver bowl. Each of six downward spiraling loops has a candle arm with a pair of candle sockets. […]

“The design is based on a logarithmic spiral that is moving downwards. The concept of an upside-down, hanging column is a remarkable one — the curling forms of the chandelier are particularly noticeable from below,” [Toledo Museum of Art curator of glass and decorative arts Jutta-Annette] Page said. 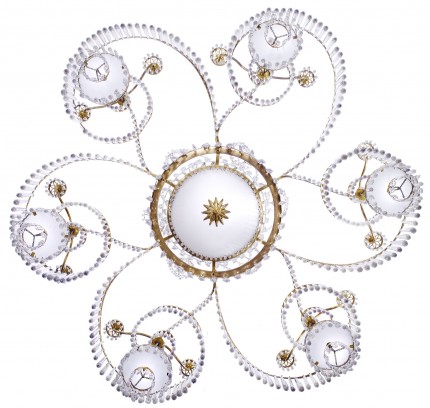 Unfortunately for him, Jérôme Bonaparte would never get the chance to enjoy his beautiful spiral chandelier. It was delivered to Brunswick Castle but never installed because he was off fighting with his brother in Russia in 1812, and in 1813 allied Prussian and Russian troops took Kassel, the capital, and dissolved the cobbled-together Kingdom of Westphalia. Jérôme and his wife fled to France. The chandelier became property of the city, along with everything else in the castle, and was sold in the mid-1930s to a Hamburg family. That family has now sold it to the Toledo Museum of Art. 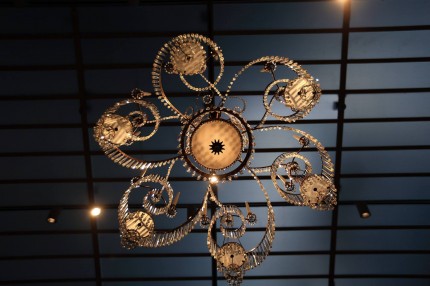