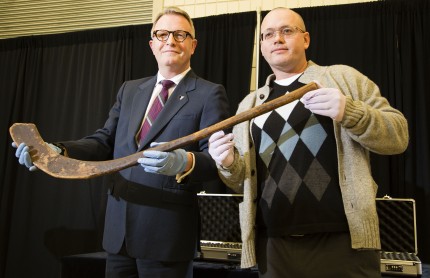 The Canadian Museum of History has acquired the oldest known hockey stick for $300,000. The seller was social worker Mark Presley who saw it mounted on the wall of a barbershop and bought it from barber George Ferneyhough in 2008 for $1,000. Fascinated by the small, clearly old hockey stick, Presley traced its ownership history and had it tested extensively to determine its age. (You can read the documentation of his research here.) He discovered that the stick was hand-carved out of a single piece of (what else?) sugar maple between 1835 and 1838 in North Sydney along the northeastern coast of Cape Breton Island, Nova Scotia. The original owners were the Moffatt family, scions of Loyalist shipbuilder Captain James Moffatt, born in Dumfriesshire, Scotland, in 1737, who was one of the first settlers of Upper North Sydney’s Pottle Lake area.

It was a Moffatt, Charlie Moffatt, who had given George Ferneyhough the stick thirty years earlier. Presley tracked Charlie Moffatt down. Then 92 years old, Moffatt told Presley that while he never used it himself, he remembered the old handmade stick hanging on the porch of the family’s homestead on Pottle Lake until the farm with its two acres of waterfront property was expropriated by the government in the 1960s when the lake watershed became the protected potable water source for surrounding municipalities. Charlie’s father Warren told him he and his father Thomas had used the stick to play on Pottle Lake when they were young, and Thomas was born in 1837, so Presley realized this stick could well be very old indeed.

Initials “WM” carved into the blade of the stick when it was still new before any of the many layers of paint were applied indicate that the first owner was William “Dilly” Moffatt, Thomas Moffatt’s brother and Charlie’s great-uncle. Thomas and Dilly’s father John Mumford Moffatt probably carved the stick for his sons, and he did an outstanding job of it, starting with the lumber selection. Experts at Mount Allison University in Sackville, New Brunswick, studied the wood and found the direction of the pith indicates it was taken from a small tree growing outward and upward from a cliff or creek bank. This growth pattern gave the tree’s lumber a natural J-shaped curve. That made the stick easy and fast to carve and extremely strong since the blade was part of the natural sweep of the wood.

The Mount Allison researchers were also able to date the stick by its tree rings. No other antique hockey stick has been able to be dendrochronologically dated because you need a certain number of rings to establish a pattern that can be matched with a previously known chronology and hockey sticks don’t generally have usable ring groups. The experts determined the minimum number of rings they would need was 30. The butt of the Moffatt stick turned out to have 43 rings, a remarkable number for the small diameter of a hockey stick. Matched against a sugar maple chronology established from Pottle Lake trees and adjusted for additional rings and knots, the date the wood was cut determined to be between 1835 and 1838. The paint evidence supported that conclusion, with the first of the five layers being a natural “red earth” pigment based on iron oxides ground up with charcoal that was in common use in Cape Breton between 1800 and 1850.

That makes the Moffatt stick a good 20 years older than any other hockey stick known to survive. The stick previously thought to be the oldest was made between 1852 and 1856 by Glasgow-born Alexander Rutherford who carved it out of hickory at his farm outside Lindsay, Ontario. His son, Alexander Rutherford Jr., played with it before handing it down to his own son Melville Rutherford. Melville gave to his nine-year-old grand-nephew Gord Sharpe who kept it for three decades before putting it on display at Wayne Gretsky’s Toronto restaurant for a few years and then auctioning it off on eBay in 2006. It sold for $2.2 million Canadian. Sharpe gave the profits to a charity he founded and the buyer put the Rutherford stick on display at the Hockey Hall of Fame in Toronto.

Given that enticing precedent and needing money to fund his return to college, Mark Presley chose to follow in Sharpe’s footsteps and put the Moffatt stick up for sale on eBay in March of 2014. Excitement was rife with talk of millions of dollars (Mr. Ferneyhough was pretty disgruntled at the prospect) but the highest bid was $118,000 Canadian which failed to meet the reserve.

The Canadian Museum of History, provisioned with moneys from the donor-supported National Collection Fund, was able to make a deal with Presley to secure the world’s oldest known hockey stick for the nation, and boy are they happy about it.

“Hockey is Canada’s game — we developed it and we cherish it like no other country in the world,” said Mark O’Neill, President and CEO of the Canadian Museum of History. “The Moffatt stick is a unique and powerful link to the sport’s earliest days in this country, and is an example of the national treasures Canadians will see in their new national museum of history.”

“Our Government is proud that the Canadian Museum of History has acquired this important part of our history,” said the Honourable Shelly Glover, Minister of Canadian Heritage and Official Languages. “Through its acquisitions, the Canadian Museum of History provides Canadians with greater access to our rich and diverse history. As we approach Canada’s 150th anniversary in 2017, this is an opportunity for all of us to appreciate our great heritage.”

The Moffatt stick will go on display in the museum’s new Canadian History Hall on the 150th anniversary, Canada Day (July 1st) of 2017.