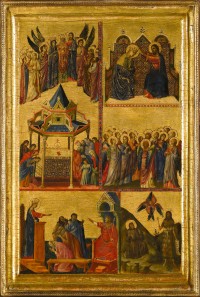 Giovanni was the leading artist in a group of artists from the northern Italian city of Rimini whose innovative approach combined the devotional intensity and symbolism of Byzantine iconography with the more naturalistic figural depictions that would follow. The works of the Rimini school are therefore important transitional pieces that bridge the gap between late medieval fresco masters like Giotto and the early Renaissance.

This left panel of the diptych is the greatest of the three known works by Giovanni da Rimini. The right panel is more traditional, divided into six squares of equal size which depict scenes from the life of Christ in chronological order. The left panel takes a more creative approach in composition and subject. The top two thirds is divided into two vertical quadrants with the right quadrant divided into two again. That bottom third is divided into two scenes but the border line between them is further to the right than the centered vertical of the top section. This gives the panel a more dynamic design and allows the artist to introduce variety of composition. The double-height section in the upper left depicts the Apotheosis of Saint Augustine. Since there’s so much space, Giovanni was able to create a temple-like empty tomb for Augustine with a heavenly host of angels above and a crowd of astounded onlookers around it. Augustine is in the middle of the angels wearing the mitre.

The two scenes to the right of the Apotheosis are the Crowning of the Virgin up top and a celebratory crowd of saints and angels beneath, a sort of flipped version of Augustine’s scene. Notice the angel with his back to the viewer in the center of holy crowd. Those wings are an early example of foreshortening in medieval art. The left of the bottom third of the panel is dedicated to the Dispute of Saint Catherine of Alexandria, when the Emperor Maxentius deployed 50 of the greatest philosophers in Rome to defeat her in debate. She won and a bunch of the philosophers converted. The last scene on the bottom right shows Saint Francis receiving the stigmata in front of John the Baptist with a seraph above them.

The panel arrived in England from the collection of 19th century Neoclassical painter Vincenzo Camuccini. Considered one of the greatest academic painters in Rome during his lifetime, Camuccini was showered with portrait commissions, appointments and titles during his lifetime. He spent his fortune collecting the 16th and 17th century Italian masters he used to copy when he was a student, accumulating more than 70 highly praised pieces before his death in 1844. In 1853, his heirs sold the entire Camuccini collection to Algernon Percy, 6th Duke of Northumberland, who installed the artworks in the family seat of Alnwick Castle.

Giovanni da Rimini’s panel remained on the walls of Alnwick Castle adorning the boudoir of the duchess until July of last year when the current Duke put it up for auction at Sotheby’s London. The pre-sale estimate was £2-3 million ($3,428,000 – 5,142,000) and the hammer price including buyer’s premium was £5,682,500 ($9,739,237). When the anonymous buyer asked for an export license, Culture Minister Ed Vaizey placed a temporary export bar on the work to give UK institutions a chance to raise the purchase price and keep the one-of-a-kind piece in the country.

Aidan Weston-Lewis from the [Reviewing Committee on the Export of Works of Art and Objects of Cultural Interest] said:

This jewel-like, exquisitely preserved, seven hundred-year old panel is by a good margin the most important example in the UK of the seminal Riminese school of painting. Although this country can boast impressive collections of early Italian art, there is nothing comparable to this in any British public collection.

With the clock ticking, Ronald S. Lauder, son of beauty industry mogul Estée Lauder, struck an unusual deal with the National Gallery: he’d donate the £4.919 million necessary to for them to buy the painting as long as the museum agreed to loan him the panel for his lifetime. He would then loan it back to the museum for display, first in 2017, then up to once every three years after that. After Lauder’s death (he’s 71 years old), the painting would physically join the National Gallery’s permanent collection. The NG took the deal with alacrity.

This isn’t the first time one of the Camuccini paintings from the Duke of Northumberland’s collection was saved for the nation after a sale that would have taken it out of the country. In 2003 the National Gallery had to scramble to raise a crazy £34.88 million ($54 million) to acquire Raphael’s Madonna of the Pinks after the Duke accepted an exorbitant purchase offer from the Getty Museum in Los Angeles. A temporary export bar that was extended several times gave the museum a year to raise the huge sale price from grants and private donations. The hard-won masterpiece has been on loan to the Minneapolis of Arts from the National Gallery since March. The exhibition ends on August 16th, so if you’re anywhere near Minneapolis you should hustle to catch the $50 million Raphael before it returns to London.