Manneken Pis, a small bronze statue of a little boy urinating in perpetuity in the historic center of Brussels, has become an iconic representation of the city’s irreverent spirit. Reproductions flood souvenir shops, candy shops, delicious Belgian chocolate shops. The little fellow is dressed in new outfits several times a month and is a magnet for tourists as well as the beloved “first citizen of Brussels.” The one micturating in place right now is a reproduction, but the original is on display in the nearby City of Brussels Museum. Or is it?

The original statue Manneken Pis was made in 1619 by Jérôme Duquesnoy the Elder, a native son of Brussels who had made a name for himself making sculpting statues and features for churches which had been stripped of all adornment during the Protestant iconoclasm that cut a destructive swath through the Low Countries in 1566. It is said to have been the donation of a rich burgher whose lost son was found urinating on the spot where the statue now stands. It is said to have been inspired by a little boy who put out the fires of a besieging army by pissing on them. It is said to have been inspired by a boy who urinated on a fuse preventing explosives from destroying the city.

One of the many origin stories doesn’t get bandied about so often anymore, but it was just as popular as the lost child, fire and fuse extinguishing legends. It ties Brussels’ favorite son to an ugly side of Brussels history that was celebrated for almost 600 years, a so-called miracle centered around a classic medieval Blood Libel horror show. In 1370, so the libel goes, a wealthy Jew from Enghien bribed a Jewish convert to Christianity to steal consecrated hosts for him to desecrate. When the rich man was killed under mysterious circumstances, his scared wife gave the purloined ciborium to the Jews of Brussels where they assembled at the synagogue on Good Friday, no less, to profane the hosts. When they stabbed the wafers, blood miraculously poured from them. The Brussels congregation were duly terrified and paid an another Jewish convert to Christianity, a woman this time, to pass the hot potato on to the Jews of Cologne. She ratted them out to her parish priest. 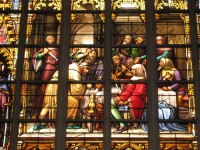 On her testimony, the rulers of Brabant, Wenceslaus I of Bohemia and his wife, the actual heiress to the duchy, Duchess Joanna, sentenced all those involved in the stabbing of the hosts to death and banished every other Jew from Brabant. Six were burned at the stake. All Jewish property was confiscated. The Holy Hosts were reclaimed, the ostensibly pierced ones set in bejeweled remonstrances and carried in a great annual procession through the city. From the 16th century the yearly processions of the Blessed Sacrament of Miracles were official state events. Holy Roman Emperor Charles V had 10 stained glass windows installed in the Cathedral of St. Michael and St. Gudula depicting the Blood Libel/miracle. In the 19th century Kings Leopold I and II of Belgium and other nobles added another five windows depicting the growth of the Cult of the Miracle. The 500th anniversary of the miracle was celebrated with great fanfare in 1870.

World War II brought it all to a halt. In the aftermath of the mass-murder of Belgian Jews in the Holocaust, the immolation of Jews in the 14th century suddenly didn’t look like a quaint local custom worth celebrating. After the Papal decree of Nostra aetate promulgated in 1965 officially repudiated all anti-Semitic acts, beliefs and displays as inconsistent with the spirit of one particular Jew the church is very fond of, the Brussels Archdiocese derecognised the Cult of the Miracle. Since the Cathedral of St. Michael and St. Gudula couldn’t very well take down their stained glass windows like they took down the tapestries, in 1977 Cardinal Leo Jozef Suenens installed a bronze plaque in the former chapel of the Blessed Sacrament (now the treasury) abjuring the so-called miracle.

With the Cult of the Miracle holding so prominent place in the history of Brussels, it seems inevitable that a story would be conjured up connecting it to the first citizen of Brussels, Manneken Pis. In this version of the origin story, an old Jewish man kidnapped a beautiful Christian boy from the very spot where the fountain now stands during the first procession of the Hosts. The kidnapper planned to crucify his victim, but the boy’s father prayed fervently to another local miracle, the statue of the Virgin Mary in the church of Notre Dame de Bon Secours (Our Lady of Good Succor), and the old man got scared. He dropped off the child in the same place where he had taken him. The boy’s parents found him there, urinating against the wall. In gratitude, they had the fountain built and added a topper to the church’s dome in the shape of the pyx that held the hosts.

Unsurprisingly, this story is internally inconsistent nonsense. The church of Notre Dame de Bon Secours wasn’t even built until the 17th century. Although there was a small church on the site in the 13th century, it was dedicated to St. James the Great and was a step on the pilgrim road to Compostela. The wish-granting statue of Mary was discovered there in 1625 and quickly became such a popular object of veneration that less than 50 years later the old St. James church was replaced with the new Baroque church dedicated to the miraculous Mary.

Even Manneken Pis’ more recent history is nebulous. It was hidden in 1695 to keep it safe during King Louis XIV of France’s bombardment of Brussels and was returned after the fires were extinguished. It was looted by English troops in 1745, damaged by French troops in 1747 and stolen by pardoned convict Antoine Lycas in October 1817. Lycas was arrested in November and sentenced to hard labour for life for the theft. The statue, or one that looked like it, was put back in its place the next year. It was stolen again 1963 and found in Antwerp. The last theft was in 1965 and it was the most damaging of them all. It was found in 1966 in a canal in two pieces.

After that, a replica statue was installed in the fountain while the putative original statue was given over to the care and feeding of the City of Brussels Museum. It was extensively restored in 2003 and is now in one piece again, on display along with a myriad replicas showing off the many cute outfits Manneken Pis has sported over the years.

Researcher Géraldine Patigny of the Free University of Brussels believes the original may never have been recovered after the 1817 theft. The history of the statue’s whereabouts relies mainly on news stories and folklore. With war and theft leaving large holes in the historical record, there is little relevant documentary evidence that would allow researchers to trace Manneken Pis’ steps. They’re hoping science can fill the gap.

Using X-ray fluorescence spectrometry, the research team will analyze the metal composition of the statue. If the bronze alloy contains nickel, that will be strong evidence that it was made in the 19th century. If not, that increases the likelihood that the statue is original but of course can’t confirm its age. Researchers will also take tiny samples from the surface and interior of the statue to examine the erosion pattern and patina for clues to the statue’s age. Comparisons with samples of bronze from the period and workshop might help determine if Manneken Pis we know now is the one made by Jérôme Duquesnoy in 1619.