Five years ago, the news broke that premier cuneiform scholar Dr. Irving Finkel, Deputy Keeper of Middle East at the British Museum, had translated a new account of the ancient Babylonian Flood Story on a clay tablet from 1,750 B.C. and found directions for making a round ark. There are multiple versions of the deluge myth in the ancient Near East. One features Ziusudra, King of Sumer, as the Noah figure and is found on a single tablet from the 17th century B.C. excavated in Nippur, Iraq. The Epic of Gilgamesh tells the story of Utnapishtim who was tasked by the god Enki-Ea to build a boat that would save his family, craftsmen, plants and animals from the flood the other gods were sending to destroy humanity. The earliest surviving Gilgamesh tablets date to the 18th century B.C. The Akkadian version is named after its hero, Atra-Hasis, and is found on fragments of tablets also dating back to the 18th century B.C. The Flood Story on the tablet recently translated by Dr. Finkel is the Akkadian Atra-Hasis version.

All of these versions of the Flood Story precede the Biblical version with the one God and Noah by a thousand years, a fact that caused a sensation in 1872 when British Museum Assyriologist George Smith announced he’d found the first cuneiform account of the Great Flood, now known to be the 11th Tablet of the Epic of Gilgamesh. Smith published his find in the 1876 book The Chaldean Account of Genesis, a seminal volume in the history of Assyriology even though several of his translations, admittedly makeshift solutions to missing bits in the sources (he suggested Gilgamesh was to be read Izdubar), have since been corrected.

Finkel published his translation of the Atra-Hasis tablet last year in The Ark Before Noah: Decoding the Story of the Flood, a fascinating archaeological detective story that manages that rare feat of conveying its author’s contagious enthusiasm along with the scholarly information. I’m sure in someone else’s hands the analysis of cuneiform tablets can make for dry reading, but Dr. Finkel’s ebullience shines through on every vigorously-turned page.

That endlessly renewable resource of enthusiasm played a key role in the translation of the round ark tablet. Dr. Finkel first encountered the small cuneiform tablet in 1985 when it was one of several pieces Douglas Simmonds brought to the British Museum for expert assessment. Douglas’ father Leonard was in the Royal Air Force after World War II and had amassed a significant collection of Near East artifacts during his travels. After Leonard’s death, Douglas researched the objects. Finkel had already helped him with several cylinder seals and clay tablets before the fateful 1985 encounter.

As one of very few people in the world who can sight-read cuneiform, Finkel was able to read the clean first verses of the tablet: “Wall, wall! Reed wall, reed wall! Atra-Hasis…” That passage is famous among Assyriologists as the opening lines of the Atra-Hasis Flood Story. Finkel was thrilled at such a rare find and asked to keep the tablet so he could translate the whole thing which is covered in cuneiform front and back, but Mr. Simmonds was unwilling to part with it. It wasn’t until 2009 when Dr. Finkel spotted Douglas Simmonds at the Babylon, Myth and Reality exhibition that the latter finally agreed to bring the tablet in for translation. 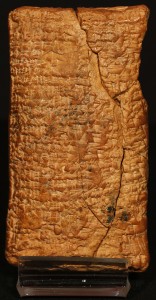 The sixty lines of the Ark Tablet go into unprecedented detail on the design of the boat and the materials used in construction. None of the other Atra-Hasis tablets describe the vessel. This is most of what’s on the front of the tablet:

Wall, wall! Reed wall, reed wall!
Atra-Hasis, pay heed to my advice,
That you may live for ever!
Destroy your house, build a boat;
Spurn property and save life!
Draw out the boat that you will make
On a circular plan;
Let her length and breadth be equal,
Let her floor area be one field, let her sides be one nindan high,
You saw kannu ropes and aslu ropes/rushes for [a coracle before!]
Let someone (else) twist the fronds and palm-fibre for you!
It will surely consume 14,430 (sutu)!”
“I set in place thirty ribs
Which were one parsiktu-vessel thick, ten nindan long;
I set up 3,600 stanchions within her
Which were half (a parsiktu-vessel) thick, half a nindan high;
I constructed her cabins above and below.”
“I apportioned one finger of bitumen for her outsides;
I apportioned one finger of bitumen for her interior;
I had (already) poured out one finger of bitumen onto her cabins;
I caused the kilns to be loaded with 28,800 (sutu) of kupru-bitumen
And I poured 3,600 (sutu) of ittu-bitumen within.
The bitumen did not come to the surface [lit. up to me];
(so) I added five fingers of lard,
I ordered the kilns to be loaded … in equal measure;
(With) tamarisk wood (?) (and) stalks (?)
…(= I completed the mixture).

These quantities are enormous, enough palm-fiber rope, wooden ribs and stanchions to build a coracle 3,600 square meters in area, almost two-thirds the size of a soccer field, with walls 20 feet high. If the amount of rope described here were laid out in a single line, it would reach from London to Edinburgh. The vats of bitumen were necessary to waterproof a boat whose hull is, after all, made of rope.

The back of the tablet is more damaged than the front, with significant chunks missing, but what is there continues the discussion of bitumen application and then describes Atra-Hasis and his family getting on the boat. In one moving passage, Atra-Hasis prays to the moon god Sin that the coming tragedy be averted. Sin’s reply includes a line that will strike a familiar chord with anyone who has ever heard the Noah story.

“Sin, from his throne, swore as to annihilation
And desolation on (the) darkened [day (to come)]”
“But the wild animals from the steppe [(…)]
Two by two the boat did [they enter]…”

Armed with this unique description, Dr. Finkel contacted ancient ship specialists to see if they could construct a scale version of the ark. The project was filmed for a television program called The Real Noah’s Ark which first aired on Britain’s Channel 4 last September. It apparently aired as Rebuilding Noah’s Ark on the National Geographic channel, but I missed it. The British Museum’s YouTube channel just posted a five-minute introduction to the episode a few days ago, which was the first I’d heard of it. The program doesn’t appear to be available on demand from the Channel 4 website at the moment, or at least it’s not working for me. It has, however, been posted on Vimeo and I strongly urge you to watch it while the watching’s good.

Simply stated, this show has everything: Mesopotamian history, issues in ancient urban water management, the Ziggurat of Ur, dangers military and ecological, southern Iraq’s enchanting marshlands, cuneiform tablets and the laser-scanning thereof, ship design, archaeological geology, traditional crafts, how reeds can be used to make an AMAZING house, bitumen drama, flood legends and their transmission from Babylon to Judea, the reality of regular flooding in the Fertile Crescent, several exceptional beards and at the end, a big ol’ round boat.