A hoard of Viking-era silver ingots and coins discovered in Wales has been officially declared treasure at a coroner’s inquest. The hoard was found in March by metal detectorist Walter Hanks in a field in Llandwrog, north-west Wales. Consisting of fewer than 20 coins and coin fragments, three complete ingots and one partial, it’s a small trove of outsized historical significance because of its age and rarity. 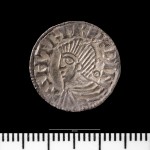 Fourteen of the coins are silver pennies minted in Dublin under the reign of the Hiberno-Norse King of Dublin Sihtric Anlafsson, aka Sigtrygg Silkbeard (r. 989-1036). Eight of them date to 995 A.D.; the other six, three of which are fragments, were minted in 1018 A.D. Sihtric’s coins are very rare discoveries on the British mainland. There are also fragments of three or four silver pennies from the reign of Cnut the Great, the Danish King of England who reigned from 985 or 995 through 1035. The Cnut coins were probably produced in the mint at Chester. 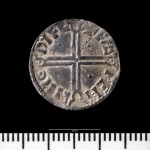 Archaeologists believe the hoard was lost or buried between 1020 and 1030. The Bryn Maelgwyn hoard, unearthed in 1979 near Llandudno in Conwy, north Wales, was buried around that time — after 1024 — and it too contains coins minted by Cnut and Sihtric: 203 Cnut silver pennies and just two Sihtric silver pennies. The Bryn Maelgwyn coins are thought to have been Viking booty rather than a savings account, however, unlike the Llandwrog hoard. The weight of the ingots is 115.09 grams out of a total hoard weight of 127.77 grams. That means fully 90% of the weight of the hoard is in the ingots which suggests the hoard’s main role was silver storage.

Dr Mark Redknap, Head of Collections and Research in the Department of History and Archaeology at the National Museum Wales said the find will help historians to form a picture of the eleventh century Gwynedd economy.

He said: “There are three complete finger-shaped ingots and one fragmentary finger-shaped metal ingot. Nicking on the sides of the ingots is an intervention sometimes undertaken in ancient times to test purity, and evidence that they had been used in commercial transactions before burial.

“At least four hoards on the Isle of Man indicate that bullion retained an active role in the Manx economy from the 1030s to 1060s, and the mixed nature of the Llandwrog hoard falls into the same category. As such it amplifies the picture we are building up of the wealth and economy operating in the kingdom of Gwynedd in the eleventh century.”

The National Museum Wales is hoping to secure the hoard. The Bryn Maelgwyn hoard is at the Cardiff branch of the Nation Museum, so it would be in excellent company. First the valuation committee must decide the fair market value of the hoard. The museum will then try to raise the price, ideally through a Lottery Fund grant, which will be divided between the finder and the landowner.