Experts haven’t been able to decipher this mysterious assortment of letters, so the British Library’s phenomenal Medieval Manuscripts blog is opening up the floor to the Internet. Some think it was a religious dedication of some kind using the first initials of words. There are inscribed crosses on the other side and an inlaid crescent near the point on both sides which may be the maker’s mark. 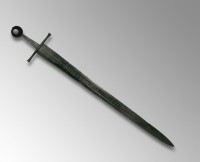 The sword was discovered in the River Witham, Lincolnshire, in July of 1825 by workers widening and deepening the river just below the lock to make room for larger vessels. The Bishop of Lincoln gave the sword to the Royal Archaeological Institute which in 1858 donated it to the British Museum. It dates to around 1250-1330 and has a straight cross guard with a wheel-shaped pommel atop the grip. Weighing 2 lb 10 oz and measuring 38 inches long, the sword was a killer, capable of cleaving a man’s skull in two.

This kind of sword was a classic knightly weapon of the 13th century and is depicted in many an effigy and illustration. Here’s an example from the British Library’s 14th century illuminated manuscript of the Grandes Chroniques de France in which French knights besiege Rouen in 1203/1204 during King Philip Augustus’ invasion of Normandy.

In fact, the sword was believed to have a very close connection to French knights from that turbulent period. When the sword was first discovered, workers found other armature — swords, daggers, chain mail — in the muck of the riverbed leading to speculation that these were the remains of French knights who had drowned in the river after the Second Battle of Lincoln in 1217. When the First Barons’ War broke out between King John and his nobles in 1215 after John refused to abide by the terms of Magna Carta, the barons invited Prince Louis of France to take the throne of England. He accepted and turned up with an army in May of 1216. Louis waltzed into London unopposed and was proclaimed king in a ceremony at St. Paul’s Cathedral. He doesn’t make the official king list because he was never crowned, but for a while in 1216-1217 the Dauphin of France actively occupied half of England.

The tide turned when King John died in October of 1216. Even though John’s son Henry was only nine years old, barons who had sided with Louis switched sides in droves. William Marshal, “the greatest knight that ever lived,” was Henry’s regent and fought at the head of his army, drawing more knights to abandon Louis for Henry. On May 20th, 1217, forces loyal to the nine-year-old King Henry III of England attacked the city of Lincoln, then held by the French. The English held Lincoln Castle, however, so while Marshall’s army took the north gate of the city, Falkes de Breauté deployed his crack crossbowmen along the castle ramparts to rain a hellfire of bolts into the French occupiers. It was a rout, followed by a very thorough pillaging of the city that has gone down in history as the Lincoln Fair. French knights who weren’t killed or captured fled, some of them sailing down the Witham. Some of the ships, laden with men, arms and armour, sank drowning the flower of French chivalry and, ostensibly, leaving their stuff behind for canal diggers to find 600 years later.

Without identifying marks connected to specific knights, this story is impossible to prove. Still, the design and period of the sword make it relevant as a weapon very much like those used during the battles between the English crown and its unruly barons. It’s neat to think that it may even go a step further and be an actually relict of the First Barons’ War.

If you have any ideas about what the inscription might mean, join the party in the comments on the Medieval Manuscripts blog entry where smart people are saying smart things.