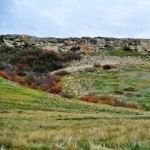 Archaeologists have unearthed a 1,600-year-old untouched roasting pit at the Head-Smashed-In Buffalo Jump in southwest Alberta, Canada. Head-Smashed-In Buffalo Jump was used by native peoples of the North American Plains to hunt, butcher and process bison for 6,000 years. It is one of the oldest and best preserved buffalo jumps, which archaeological features still surviving on the surface and under ground.

The site has four areas that were used for different purposes: the gathering basin, where the bison would graze on the lush grasses and drink fresh water well into the fall, the drive lanes, stone cairns built in lanes that hunters would chase buffalo down, the cliff kill site, the edge of the cliff which the stampeding bison would be forced off of, and the processing area where the bison were butchered, their meat roasted, the bones boiled for grease rendering, strips of meat dried in the sun and pemmican, a highly nutritious staple made of dried meat grease, marrow and berries pounded together, made to keep people alive during the long winter.

Artifacts and remains are present throughout the site. An astonishing 36 feet of deposits have accumulated below the cliff kill site alone over the course of 5,700 years, and the processing area is repeat with kitchen tools like scrapers, knives, drills, pottery and boiling stones cracked by fire.

It was in the processing area where archaeologist Robert Dawe, now Royal Alberta Museum Inventory Curator, discovered the roasting pit in 1990. He had been excavating the area for four years when he unearthed a canine paw (probably wolf rather than dog) and the articulated leg bones of a bison calf. It was the articulation of the bones that indicated this was a roasting pit, and even more intriguingly, a roasting pit whose contents had never been eaten. The stratigraphy pointed to this as a Blackfoot site about 1,600 years old. As soon as he realized that this was an incredibly rare find, Dawe covered it back up to preserve for future excavation.

The future took 26 years to happen. Dawe returned this year and dug out the entire pit encased in a soil block and wrapped tight in layers of plaster, burlap and foil.

“This thing hasn’t seen the light of day since 1,600 years ago,” Dawe said. “Nobody has seen the contents of this meal that was prepared for a delicious feast. For some reason the people never came back and opened it up.” […]

“This is a classic example of an earth oven,” Dawe said. “This is a common thing that is found all over the world.”

Dawe compared the earth oven or roasting pit used by the Plains people thousands of years ago to the modern luau in Hawaii.

What caused the Blackfoot to abandon this delicious slow-cooked meal is a mystery. It could have been anything from a fire to a sudden storm. 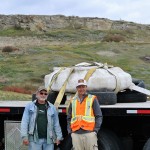 Once secured and removed, the block was then craned onto a truck and transported to the Royal Alberta Museum in Edmonton, a newly built facility that has all the bells and whistles necessary to excavate, preserve and ultimately display this treasure. Dawe and his team will painstakingly excavate it “with toothpicks and a light vacuum cleaner,” a process that will take months. Everything they find will be conserved, the bones treated to keep them from deteriorating.

Piikani Nation elder Conrad Little Leaf conducted a traditional prayer in the Blackfoot language and made a ceremonial offering of tobacco blessing the excavation team. It was a bittersweet farewell, as Head-Smashed-In’s Marketing and Special Events Coordinator Quinton CrowShoe noted, because as something their ancestors left behind, the roasting pit and its contents are sacred to them so they would much rather the pit stay in place.

But while the Head-Smashed-In Buffalo Jump site has an excellent interpretative center, it does not have the facilities to preserve delicate archaeological materials in ideal environmental conditions, so the roasting pit is slated to go on display at the Royal Alberta Museum’s new First Peoples gallery that will open at the end of 2017. There is still hope it might return to Head-Smashed-In should an appropriate facility be built.

Watch Conrad Little Leaf’s prayer, the removal of the pit and Robert Dawe’s explanation of the find in this video: