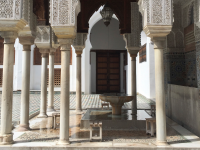 Founded in the 859 A.D. by Fatima al-Fihri, the daughter of a wealthy merchant who was herself highly educated and who dedicated her considerable inheritance to the creation of a mosque and school in her community, the University of Qarawiyyin in Fes, Morocco, is the oldest degree-granting institution in the world. The Al-Qarawiyyin library has been in continuous operation since the 10th century and is believed to be the oldest library in the world. After years of neglect, the library is undergoing extensive renovation as part of a renewal program that will restore the Medina, Fes’ walled pedestrian historic district built in the late 8th, early 9th century. In a fitting tribute to its founder, the person in charge of the restoration is a woman, Canadian-Moroccan architect Aziza Chaouni.

Inside the library are ornately carved wooden window frames and archways, colorful ceramic tile designs on the floors and elegant Arabic calligraphy engraved in the walls. The high ceilings in the reading room are adorned with gold chandeliers.

“There is a big restoration because there was a need for the building and the manuscripts to be preserved,” said Abdullah al-Henda, part of the restoration team that’s been working on the restoration since 2012. “There were problems of infiltration, of sewage, degradation of walls, some cracks in different places in the library.”

The library is replete with extremely rare, some unique, volumes. There are more than 4,000 manuscripts in its collection, including a 9th century Quran written in beautiful Kufic script on camel skin, the earliest known Islamic hadiths, and an original manuscript of the Mukkadimah, a universal history written in 1377 by philosopher Ibn Khaldun which many scholars hold to be the first exploration of fields we know as sociology, historiography, demography and other social sciences. It’s particularly meaningful to have a book written in his hand, because after university he began his career as a calligrapher for the Chancellery in Tunis. When he moved to Fez shortly thereafter, he got a job writing royal proclamations for the Sultan.

“When you read a book, you travel in history. When you see a manuscript that is nearly ten or more centuries old, you travel in time. As I said, the library gives you a spiritual bond for these and other reasons. Since I arrived at Al Qarawiyyin Library, it never crossed my mind that I would leave it,” said deputy curator Abou Bakr Jaouane.

These priceless texts need conservation as well. Some have been damaged by the moisture and decay plaguing the building itself. Now that the restoration of the structure is almost complete with new gutters, solar panels and air conditioning, the manuscripts finally have a room suited to their preservation. It is climate controlled with a custom temperature and humidity settings as well as a state-of-the-art security system. The restored library also has a new laboratory for the treatment and conservation of its historic manuscripts.

Right now, only curator Abdelfattah Bougchouf has access to the rare manuscripts kept in the secure room. With the help of experts from the Institute of Computational Linguistics in Italy, that will soon change. All 4,000+ manuscripts are being digitized in the new laboratory. This will make them widely available to students and researchers all over the world. About 20% of them have been digitized so far. The scanning process will also highlight any small holes and areas in need of conservation that are not necessarily evident to the naked eye.

The library will reopen to the public in May 2017.