Boston-born Thomas Appleton was apprenticed to cabinet maker Elisha Larned when he was a youth, a trade that he would not pursue but that nonetheless taught him key skills for his true vocation. He switched to organ building in his early 20s, getting a job in the workshop of William Marcellus Goodrich in Templeton, Massachusetts, in 1807. Goodrich would become known as the father of organ building in New England and Appleton was an apt pupil. He went into business with piano makers Hayt and Alpheus Babcock in 1810, but the company went under in the economic recession following the War of 1812. Appleton’s collaborations with Goodrich from 1810 through 1820, on the other hand, were very successful. Together they built organs, pianos and claviorgans which dominated the Boston market. During the three decades Goodrich’s shop was in operation — 1803 to 1833 — only three organs were imported into Boston because he (and later he and Appleton) were able to fill the city’s considerable demand for high quality instruments.

Appleton struck out on his own again in 1821. Over the next two decades, he did what is generally held to be his best work. According to the Organ Historical Society, Appleton “brought the hand-made organ to the zenith of craftsmanship.” Thomas Appleton lived a long, fruitful life, dying in 1872 at age 87. During his lifetime, he built 35 organs for Boston churches and organizations, and more than 100 for other cities. 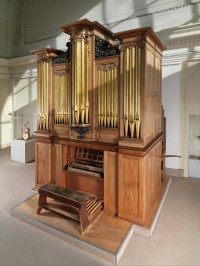 One of the latter was an organ he built in 1830, the only instrument he made that year, for South Church in Hartford, Connecticut. It was a two-manual organ with 836 pipes in sixteen ranks and an 18-note pedalboard. The façade pipes were covered in gold leaf and the instrument was cased in an extraordinary Greek Revival case 15 feet tall. The church replaced this majestic instrument with a larger model in 1854, moving the original somewhere else. It popped back up again in 1883, when it was acquired by the Sacred Heart Church in Plains, Pennsylvania. The installer, Emmons Howard, added nine notes to the pedalboard at that time.

The Appleton pipe organ was used in the Plains church until it was replaced by an electronic organ decades ago. The church thankfully did nothing at all to the Appleton instrument and it was left to gather dust in the rear gallery. That’s where it was, all but obscured by clutter, when a young organ buff happened upon it in 1980. He alerted Alan Laufman of the Organ Clearing House, an organization founded by the Organ Historical Society to rescue endangered pre-electric organs, who recognized it as the very special instrument it is. The date “1830” inside the case made it clear that this was the organ Appleton built for South Church, now the earliest surviving Appleton pipe organ.

Two years later, the organ was acquired by the Metropolitan Museum of Art. One of no more than four two-manual Appleton organs known to survive, this one was the earliest and the only one with ironclad documentation identifying it as an Appleton. It had some condition issues after so many decades of neglect — cracks in the air reservoir, dried leather on the bellows, plywood nailed to some of the mahogany veneer surfaces, bad paint jobs on others, a few broken pipes — but nothing but a few stopknob labels, a few of the keyboard ivories and bits of the moldings were missing. The giant hand-pump handle was still there. Even the initials of the choir boys tasked with pumping it were found carved on the back of the case.

Organ expert Lawrence Trupiano was tasked with restoring the organ, an exacting job to be sure, but at least there was nothing to rebuild, no modern pieces needed to replace broken or unusable origins. He regilded the façade pipes, fixed the broken pipes, renewed the mahogany case and brought it back to its original splendor. Laurence Libin, the Metropolitan Museum’s curator of musical instruments, described it as “the finest and best preserved and possibly the largest early 19th-century American instrument still intact.”

The restored Appleton pipe organ was installed in the equestrian court of the André Mertens Galleries for Musical Instruments at the Met in 1983. Since then it has been played regularly for gallery visitors and special events. In February of this year, the André Mertens Galleries closed for refurbishment. The Met took the opportunity to do some conservation work on the organ. Over the course of three weeks, the Appleton pipe organ was completely dismantled, under the hawkeyed supervision of Lawrence Trupiano. Its needs will be seen to and it will be back in place for the reopening of the gallery in 2017.

Meanwhile, enjoy this time-lapse video of the dismantling process which serves some hardcore reverse-IKEA realness accompanied by the strains of Louis Vierne’s “Divertissement” from 24 Pièces en style libre, Op. 31, performed on the Appleton organ by Paolo Bordignon on November 4th, 2015.