On October 14th, 1066, a date that will live forever on 6th grade pop quizzes, the army of William the Bastard, Duke of Normandy, defeated the Anglo-Saxon army of King Harold Godwinson at the Battle of Hastings ushering in the Norman conquest of England which ultimately claimed 100,000 lives. The Norman conquest irrevocably altered the evolution of the English language and landscape. It was William who made it a point of policy to build large stone castles to consolidate his power, replacing the more earthworks and wood motte-and-bailey castles favored by the Anglo-Saxon with the intimidating fortresses preferred by powerful lords in Normandy. Stone churches and cathedrals were also a Norman contribution.

To celebrate the anniversary in grand style, this weekend English Heritage will be hosting a program of events at Battle Abbey, built on the site of Harold’s death by William by order of Pope Alexander II as penance for having killed so many, and the battlefield. There will be music, readings, lectures, a display of falconry, panel discussions, faux battles on the hour for children, something called “Have-a-go Archery” which sounds as fun as it is potentially dangerous, cavalry, Norman and Saxon encampments with living history for visitors to interact with, and in the afternoon a full-on reenactment of the Battle of Hastings with more than 1,066 volunteers participating.

Tickets for the weekend sold out quickly, so alas, unless you managed to score your own already or knows somebody who know somebody who knows an extremely nerdy scalper, I’m afraid you won’t be able to attend the festivities. You can still visit the abbey and battlefield on Friday, though, which is the actual anniversary.

Meanwhile, The Royal Mint, which was already in operation under King Harold, has issued a 50p coin commemorating the anniversary. With all due respect to the dignified profile of Queen Elizabeth II, because my love for the Bayeux Tapestry is stronger than the foundations of the earth, it’s the reverse of this coin that absolutely slays me (pun intended). It’s a coin version of the man believed to be Harold shown with an arrow in his eye and several in his shield in scene 57 of the Bayeux Tapestry. The embroidered Latin above the scene reads “Hic Harold rex interfectus est,” or “Here King Harold is killed.” 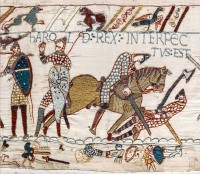 There’s also another fellow next to him being felled by a sword, though, so it’s not entirely clear which of the two is meant to be Harold. The earliest known account of the conquest, the Song of the Battle of Hastings, written in 1067 by Bishop Guy of Amiens, says that Harold was hacked to death and his dismembered body buried under a stone pile on a cliff “that you may still be guardian of the shore and sea.” Fifty years later, William of Malmesbury’s Chronicle of the Kings of England (1118) said Harold’s “brain [was] pierced with an arrow” shot “from a distance,” and that is the account that has taken root, bolstered by the epic drama of the Bayeux Tapestry. (There is, incidentally, significant debate as to whether the arrow in the eye detail is original to the tapestry or the product of a later restoration to bring the work closer in concert to what was by then the accepted story.)

Five million of these 50p pieces will be going into circulation. Collectors can purchase fancier limited edition gold proofs (£785, or $960), silver proofs (£50, or $60) and double-thick “piedfort” silver proofs (£95, or $116), plus mint condition uncirculated versions of the regular coin (£10, or $12). Only the last one comes with a booklet. I love it when things come with a booklet.