A gold coin in a toy box that figured in the pirate games of two generations of young boys turns out to be one of the rarest British coins, a bona fide treasure. The owner, who chooses to remain anonymous because he basically hit the lottery, was given the coin by his grandfather.

“My Grandad had travelled all over the world during his working life and had collected many coins from the various countries he had been”, said the stunned and delighted vendor. “He gave me bags of coins to play with (I was into pirate treasure) throughout my early years… As time passed these coins went back into bags and boxes and were forgotten about until I rediscovered them after my Grandad passed away. I looked back through the coins — remembering the stories I made up about them when I was small — and then gave them to my own son to play with and put into his own treasure box. My little boy has been playing with this coin as I did all those years ago.”

Before letting his son go fully to town on the coins, he brought them to Essex auction house Boningtons to see if any of them were worth something. Coin expert Gregory Tong recognized it as one of Britain’s rarest coins: a 1703 Queen Anne ‘Vigo’ five-guinea gold coin, made from gold taken from Spanish treasure galleons at the Battle of Vigo Bay in October 1702.

It was the early days of the War of Spanish Succession, when the last decrepit, inbred Hapsburg king of Spain died putting the Bourbon Philip V, son of Louis XIV of France, on the throne and threatening the Balance of Power in Europe. The allied fleets of Britain and the Dutch Republic had attempted to capture the port of Cádiz at the end of August 1702, hoping to gain a base in the Mediterranean for their ships and to cripple Spain’s access to the wealth of its New World colonies. The attempt was a disastrous failure. Craft and ships were lost in the landing, troops pillaged port towns and never even got to Cádiz itself. As September came and no progress was made, bad weather became an issue. On September 30th, the Allied fleet left with its proverbial tail between its legs.

The Cádiz debacle did have one useful consequence for the Allies: the Spanish silver fleet which usually landed at Cádiz was forced to dock at Vigo Bay in Galicia. Lacking the complex customs and trade infrastructure required to process the tons of silver and gold, the Spanish treasure ships and the French fleet protecting were locked into the bay for a month. The English command got wind of this as its ships were heading back to England, and figured they might at least make lemonade out of the Cádiz lemons by attacking the treasure ships.

On October 22nd, the Anglo-Dutch fleet entered Vigo Bay. The next day, they engaged the Spanish and French fleet. It was a total rout. Every single Spanish and French ship was either captured or burned. More than 2,000 men died on the Spanish-French side. Only 200 were lost on the Allied side. While most of the silver had already been unloaded from the treasure ships, the Allies did manage to score thousands of pounds of silver and a much smaller amount of gold.

Really it wasn’t that much of a monetary gain, but the outcome of Vigo Bay did persuade Portuguese King Peter II to join the Grand Alliance, and it gave the British some PR relief after the Cádiz disaster. To fluff up the minor victory and obscure the major loss, silver and gold booty from the Spanish fleet was delivered to the Master of the Mint, a certain Sir Isaac Newton, to use in the production of commemorative coins, portable propaganda to convince people that the war was going well. He received 4,504 lb 2 oz of silver and just 7 lb 8 oz of gold, for a combined estimated value of a rather measly £14,000. (Philip V of Spain made something like seven million pesos from the Vigo Bay caper because he was able to confiscate all the silver the ships were carrying meant for English and Dutch merchants, so money-wise, this victory was decidedly on the Pyrrhic side.) 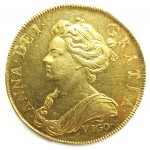 The gold was used to make half-guinea, guinea and five-guinea coins. They bore the dignified profile of Queen Anne on the obverse with the word VIGO stamped under her shoulder to publicize the source of the gold. On the reverse was the pre-union coat of arms. Only 20 of the five-guinea pieces are believed to have been struck. The Vigo coins were meant to be circulated — the silver was made into crown, half-crown, shilling and six-penny pieces — but the gold five guinea coins were so expensive that only the very wealthiest people could afford them, and they weren’t likely to spend them like cash.

When the owner discovered that the coin he’d played pirate treasure with was an actual treasure, he closed himself in the car and exulted so vigorously that the auction house staff could see the car bouncing as it was parked. He even came back the next day to be sure he wasn’t getting punked.

The coin goes on the auction block at Boningtons’ Epping saleroom on Wednesday November 16th.