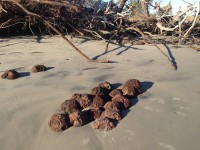 A cluster of Civil-War era artillery churned up from the sands of Folly Beach in South Carolina by Hurricane Matthew was safely detonated on Sunday evening. The 16 corroded cannonballs were found Sunday morning on the beach at East Ashley Avenue by former Folly Beach mayor Richard Beck who was walking the shoreline taking pictures of the wreckage Matthew left behind.

“I knew they were cannonballs,” he said. “One of them had a very distinct hole in it that went directly into it. Just knowing a little bit about the Civil War, I know that they put fuses in cannonballs for them to explode when they desired them to.”

Recalling a time back in his mayor days when Civil War cannonballs were found in the basement of a home and had to be detonated, Beck called the police to report the find. One of the officers who answered the call is a Civil War reenactor and confirmed the rusted lumps were indeed cannonballs.

The Charleston County Sheriff’s Office and Charleston police bomb squad were on the scene by 12:30, but couldn’t do anything until the tide was out. At around 7:00 PM, with the help of the United States Air Force Explosive Ordnance Team, authorities were able to safely detonate the cannonballs. While it’s unlikely the black powder inside of them would have ignited given their age, condition and sodden environment, as a matter of public safety, the policy is to avoid all risks and destroy the ordnance.

“We call it ‘rendering safe’ and we did that right there on the beach front,” [Charleston County Sheriff’s Office spokesman [Eric] Watson said. “They’re putting the dirt from the detonation back in the hole and they’re transporting the device to (Joint Base Charleston).”

It’s not a single device, to be clear, but most of the balls are fused together by the corrosion. According to the Sheriff’s Office Facebook page, some of the cannonballs were detonated on the spot. The rest were transported to a nearby naval base where they were destroyed Sunday night. 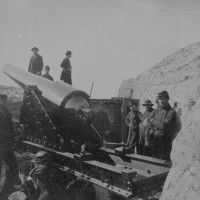 Just to give you an idea of the lay of the land, Folly Beach is less than 12 miles from Charleston Harbor (by road; it’s closer by sea). A couple more miles over the water will take you to Fort Sumter where the first shots of the Civil War were fired on April 12, 1861, when Confederate cannon barraged the Union garrison at the fort. Folly Island itself didn’t see a great deal of combat during the war — there was a single battle (more of a skirmish, really) on May 10th, 1863, when Confederate troops scouting the island attacked Union troops they found there — but the island was occupied by 13,000 Union Army in August of 1863. They used it as a supply station, building a fort and an artillery battery in support of the Union troops besieging Charleston. It was a staging area for both Battles of Fort Wagner (July-September 1863), which took place on the adjacent Morris Island. The second Battle of Fort Wagner was famously depicted in the film Glory and the remains of at least 19 men from all African-American units including the 55th Massachusetts, 1st North Carolina Colored Infantry and the Second U.S. Colored Infantry were discovered at the west end of Folly Beach in 1987.