University of Pennsylvania have discovered the tomb of little-known 13th Dynasty pharaoh Sobekhotep I at the archaeological site of Abydos 300 miles south of Cairo. The team unearthed the massive 60-ton red quartzite sarcophagus last year but wasn’t able to identify its owner until last week when they found fragments of a stele inscribed with the pharaoh’s cartouche and depicting him enthroned.

The tomb was built out of limestone from the Tura quarries near Cairo and was originally topped by a pyramid, now gone. The handful of other 13th Dynasty pharaonic tombs that have been discovered are in the royal necropoli of Dashur, 25 miles south of Cairo, and Saqqara, 19 miles south of Cairo. They too were topped by pyramids, only parts of which survive. 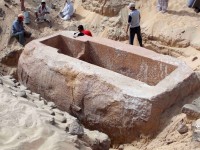 Inside the tomb archaeologists found canopic jars that once held the pharaoh’s viscera so they could be reunited with their mummified owner in the afterlife and some gold funerary objects.

This is a highly significant find because the history of the 13th Dynasty rulers is nebulous. Historians aren’t even sure of when the dynasty began — 1803 B.C. and 1781 B.C. are the leading contenders — never mind who ruled when. Antiquities Minister Mohamed Ibrahim said in a statement that Sobekhotep I “is likely the first who ruled Egypt at the start of the 13th dynasty during the second intermediate period” but there is no consensus on that point among Egyptologists. According to the Turin King List, a papyrus written during the reign of Ramesses II (1279–1213 B.C.) that lists all the kings of Egypt up until that time, grouping them together in vaguely dynastic clusters and noting the dates of their reigns, puts Sobekhotep somewhere in the 13th Dynasty but it’s unclear where it begins and the 12th ends. There’s also some confusion about whether the Turin list is Sobekhotep I or Sobekhotep II, another pharaoh of the 13th Dynasty of the same name who may or may not be the same person as Sobekhotep I.

Before now, other than his presence on the Turin King List all we know about Sobekhotep I has come from reliefs in an Abydos chapel. According to Antiquities Ministry official Ayman El-Damarani, Sobekhotep I ruled Egypt for four and a half years, but that presumes he’s the first pharaoh of the dynasty who is known from various sources as Khutawyre, Wegaf and Sekhemre Khutawy Sobekhotep. University of Copenhagen Egyptologist Kim Ryholt places Sekhemre Khutawy as the dynasty founder, with Sobekhotep I ruling for about three years between 1780 and 1777 B.C.

With all these disputed and conflicting sources, you can see why the discovery of the pharaoh’s tomb is a major boon to Egyptologists. It has the potential to answer a lot of questions.