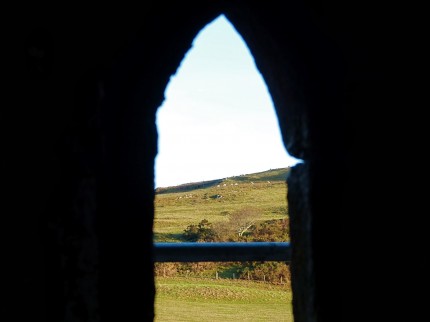 What you’re looking at here is the beautiful prospect from a lancet window in the north wall of Mingary Castle, a window that was sealed in the late 15th or early 16th century and has now been reopened for the first time in 500 years. Built on a promontory on the Ardnamurchan peninsula on the northwest coast of Scotland in the 13th century, Mingary Castle was a stronghold commanding the Sound of Mull, an important part of the great western shipping lane at a time when the Viking/Gaelic rulers of western Scotland ran fleets of galleys for trade, travel and war. Since the ships hugged the coast to avoid Atlantic storms, coastal castles dominated seagoing traffic.

It’s not certain who first built the castle. Clan MacDougall is one possible candidate, but by the time the window was sealed, Mingary Castle was the seat of Clan MacIain, one of the most powerful septs (vassal branches) of Clan MacDonald. Although technically they were vassals of kings of Norway and Scotland at various times, in practice they ran their territories independently as Lords of the Isles. Mingary was one of a chain of strategically important castles in the MacDonald fiefdom.

It was a new threat from the landward side that caused the MacIains to block up the north windows. The slender pointed arch windows, used to fire arrows and crossbow bolts onto attackers, were in walls that ranged in thickness from 60 centimeters (ca. 1’12”) to 80 centimeters (2’7″). This was the thinnest the castle walls got and since they faced land, they were particular susceptible to recently-invented cannons that packed enough punch to pierce much thicker masonry walls. To fix this weak spot, the MacIains had stonemasons fill in the windows and the chambers where defenders wielded their weapons. They did a most thorough job of it, too.

The castle fell out of MacIain and MacDonald control in the early 17th century. The Campbell family, Earls of Argyll, took the castle and held it so effectively that they destroyed Clan MacDonald when they attempted to retake the castle by besieging it. In the early 18th century the Mingary estate was sold to Alexander Murray; 50 years later it was sold to James Riddell whose family owned it until 1848. All of these post-MacIain owners made modifications and additions to the castle, keeping it in livable condition without destroying the original structure from the 1200s. After 1848, the estate was still used by locals, but the castle increasingly deteriorated until the interior was too dangerous to inhabit.

The estate was purchased by Donald Houston 20 years or so ago. He has restored many of the structures on the property, and is now restoring the castle itself with the goal of keeping the walls from crumbling and making the castle inhabitable as a residence for humans again. Because of its relative remoteness and the long centuries of occupation, Mingary Castle is the best preserved 13th century castle in Scotland. It’s therefore of great historical significance to the country.

Mr. Houston has founded the Mingary Preservation Trust, a charitable organization that is raising the £2 million ($3,300,000) needed to restore the castle. (If you’d like to contribute, click here to donate or, if you’d prefer to get a piece of the castle itself, you can adopt your very own stone.)

Part of the restoration project was the reopening of the north wall chambers and lancet windows. On Thursday, January 16th, workmen broke through the incredibly hard infill that blocked off the left top window, gingerly removed the stones and opened it to expose a beautiful view last seen by human eyeballs 500 years ago.

Jon Haylett, a local historian who has been overseeing the excavation said: “There was a real sense of excitement that we could, for the first time in 500 years, look out at a view which was last seen when members of Clan MacIain held Mingary Castle.

“Looking out of the window was an eerie experience, realising that the last person to see that view was probably a stonemason, some half a millennium ago.

“Next to me, doing the clearing, were two modern stonemasons from Ashley-Thomson, the building restoration firm, and I think they were equally moved.”

They were hoping to find organic material or some artifacts embedded in the fill that would help narrow down when the windows were sealed, but so far all the attending archaeologist has found are some tiny bone fragments, probably the detritus of a meal left behind by the masons who last worked there half a millennium ago. They did find an interesting architectural element: a groove around the inside of the window, probably used to hold a shutter or wooden board to close the window when necessary.

Now the restoration team is digging across to the double lancet windows on the right. You can read all about their progress and enjoy the exceptional photographic documentation of the restoration on the marvelous Mingary Castle blog authored by Jon Haylett.