The construction of a subway extension in Mexico City has proven an archaeological bonanza. Over the 15-mile area excavated between October of 2008 and August of 2012, archaeologists unearthed a large variety of pre-Hispanic Aztec remains: homes, floors, water channels, sculptures, pottery, tlecuiles (small rectangular hearths made from flat stone slabs over a clay-lined bottom) and 63 burials, most of them of children. 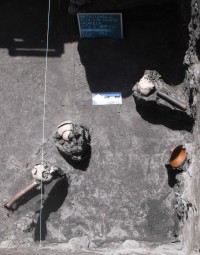 The National Institute of Anthropology and History (INAH) announced Tuesday that among the discoveries was a unique instance of a canine skull perforated through both temples, which strongly suggests it was strung along a rack known as a tzompantli, a ceremonial monument made out of sacrificed skulls. Three human skulls with perforated temples were found alongside the dog skull, one of a woman between 18 and 22 with an intentional cranial deformation, one male between 25 and 35 and one male under 35. They date to between 1350 and 1521, the Late Post Classic period. This is the first time a dog skull has been found with the characteristic tzompantli holes.

The skull racks usually displayed the severed heads of captured warriors from rival groups, who were sacrificed as an offering to the gods. Few of them have actually been excavated.

“We know that during the conquest some horse skulls were placed on this type of structure, but not dogs,” said institute archaeologist Maria de Jesus Sanchez, referring to an account documented by the Spanish conquerors who found the remains of captured colleagues as well as their horses displayed on a rack.

Since the Aztecs didn’t have horses, they may have taken the animals as sacred beasts, or something joined with the horse’s rider.
The Aztecs did have dogs, albeit smaller ones that seldom barked, so they would probably have known what they were putting on display.

“Perhaps there are dogs associated with these altars in other sites and we don’t know it,” de Jesus said. 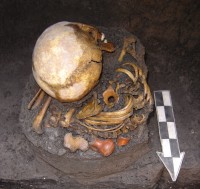 The skull of the woman is a surprise find as well. Other tzompantli finds (see last year’s discovery in Mexico City’s Templo Mayor) are of male skulls. Archaeologists believe the racks were made from the heads of captured warriors rather than captive civilians, so the discovery of a tzompantli with two male skulls, one female and one canid upends what little we do know about the practice.

The 63 burials discovered in the subway excavation pre-date the tzompantli skulls. Most of them were babies placed in pots and buried in the ground between 1150 and 1350 A.D.

Two adult burials of particular note are relatively recent, dating to around 500 years ago. One of is of an individual in fetal position buried with a miniature bowl in his abdominal area and an incense-burner on top of his head. The other is in a seated position surrounded by offerings, among them a basalt grinder, three tubes carved out of bones, two tripod bowls and two ceramic bowls of the Aztec III style (black-on-orange pottery made in the Late Aztec period just before the arrival of the Spanish). 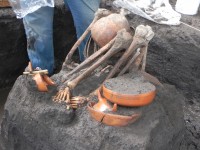 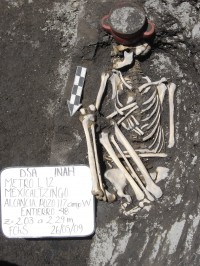