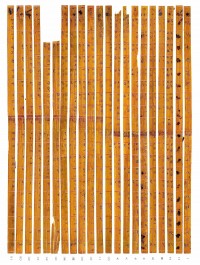 Researchers from Tsinghua University in Beijing have discovered the world’s oldest decimal multiplication table on 21 strips of bamboo made around 305 B.C., during the Warring States period before Qin Shi Huang unified China as the first Emperor of the Qin Dynasty. Old Babylonian cuneiform tablets have been discovered with mathematical tables, including times tables, from around 2,000 B.C., but the Babylonians used a local base-60 notation. The Chinese strips long pre-date the first known European decimal multiplication tables which are from the Renaissance.

The historic table was part of a large collection of 2,500 bamboo strips donated to the university five years ago. The donor had purchased them at a market in Honk Kong, but the artifacts showed the tell-tale signs of having been recently looted from a tomb. They were in abysmal condition — stinking and covered in mud and mold — and in no particular order. The strips are less than a half-inch in width at most and half a meter (just under 1’8″) long. Each strip has ancient Chinese calligraphy painted on the surface.

Deciphering them was no small task. After radiocarbon dating and conservation, researchers spent years puzzling together the strips which when knew were connected with strings forming a readable manuscript. Trying to figure out how such a massive collection of strips related to each other 2,300 years later with the strings long and gone and damaged or lost strips was like solving a jigsaw puzzle without a picture on the lid to go by and lots of missing pieces. Eventually they were able to figure out that the bamboo strips formed 65 ancient texts.

Twenty-one of the 2,500 strips stood out from the rest because they were painted only with numbers. Feng Lisheng, historian of mathematics at Tsinghua University, and his team found that when arranged in the proper order, those 21 strips formed a multiplication matrix, just like the ones in the back of notebooks when I was a kid.

The top row and the rightmost column contain, arranged from right to left and from top to bottom respectively, the same 19 numbers: 0.5; the integers from 1 to 9; and multiples of 10 from 10 to 90.

As in a modern multiplication table, the entries at the intersection of each row and column in the matrix provide the results of multiplying the corresponding numbers. The table can also help users to multiply any whole or half integer between 0.5 and 99.5. Numbers that are not directly represented, says Feng, first have to be converted into a series of additions. For instance, 22.5 × 35.5 can be broken up into (20 + 2 + 0.5) × (30 + 5 + 0.5). That gives 9 separate multiplications (20 × 30, 20 × 5, 20 × 0.5, 2 × 30, and so on), each of which can be read off the table. The final result can be obtained by adding up the answers. “It’s effectively an ancient calculator,” says Li [Junming, a historian and palaeographer at Tsinghua].

And a highly versatile one at that, although there’s no way of knowing exactly which functions would have been used in what context 2,300 years ago. Possible practical uses of the table include calculating surface idea, crop yields and taxes. It could also have been used for theoretical math or teaching.

“The discovery is of extraordinary interest,” says Joseph Dauben, a maths historian at City University of New York. “It’s the earliest artefact of a decimal multiplication table in the world.”

It “certainly shows that a highly sophisticated arithmetic had been established for both theoretical and commercial purposes by the Warring States period in ancient China,” he adds.

It’s considerably more advanced than later times tables produced in the Qin Dynasty. Those tables date to between 221 and 206 B.C. and they’re simple sentences like the kind you recited in class of the “two times one is two, two times two is four, two times three is six” variety. You can’t really use sentences to calculate elaborate multiplications, never mind divisions, square roots, etc. in the same way you can with a matrix. Qin Shi Huang did a lot of book burning in his efforts to forcibly unify Chinese scholarship just as he had Chinese territory. Perhaps matrix multiplication tables were part of what was lost in Qin’s Procrustean reformation of China’s intellectual tradition.