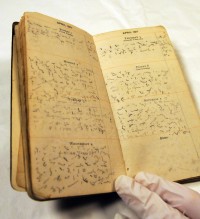 Curators at the York Castle Museum were cleaning out the stores to make room for an upcoming exhibition when they stumbled on boxes of previously unknown archival material from the First World War. Two diaries written entirely in shorthand caught their eye. A card found with them identified the diaries as records of the Palestine Campaign in 1917-1918, written by Wass Reader of the 1st East Riding Yeomanry C Squadron.

Nobody at the museum is able to read this particular shorthand and they’re appealing to the public for any insight.

“We don’t know what kind of shorthand it uses – it could be a military style – so we would love to hear from people with expertise in military shorthand. The name Wass Reader is very unusual, so if anyone recognises that name we would like to hear from them as well,” [assistant curator of history] Katie [Brown] added.

Like so many other museums in the UK, the York Castle Museum will be marking the centenary of the beginning of World War I with an exhibition dedicated to the conflict. 1914: When the world changed forever opens on June 28th, the hundredth anniversary of the day Gavrilo Princip assassinated Archduke Franz Ferdinand, the heir presumptive to the throne of the Austro-Hungarian Empire, and his wife, Sophie, Duchess of Hohenberg, in Sarajevo. The exhibition won’t focus solely on the war, but on its societal context, on the rapidly changing world of the turn of the century.

Curators are keen to include the newly discovered diaries, but they know nothing about them beyond what was written on that card.

Katie added: “It’s frustrating because we don’t know even really know when we acquired the diaries. We want to know whether this is a record of someone’s personal opinions on the war, or the mundane details of his day-to-day life.

“We want to know more about York’s links in the war as well, and these come from a local regiment.”

The diaries are even more intriguing because they come from the Palestine campaign, a part of the war that is not as well known as the European campaigns, she added.

Contact Katie Brown by phone at 01904 650363 or email katie.brown@ymt.org.uk if you have any information about the regiment, Wass Reader or the shorthand in the diaries.

On a tangentially related note, I was fortunate enough to receive a copy of The Great War, Joe Sacco’s 24-foot cartoon of the first day of the Somme, for Christmas and it is truly an astounding piece of work. To give you a sense of its breathtaking breadth, here is a video of the whole book unfurled:

It comes with a second book that is all annotations so you can follow along and make sense of the incredible density of visual information from Lord Kitchener doing the recruitment point before the title page to the massive explosions in the trenches at the end of the day.