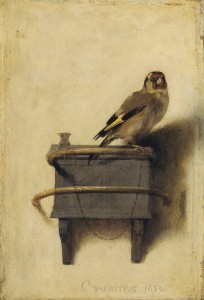 A little goldfinch is giving a pretty girl with a pearl earring a serious run for her money at New York’s Frick Collection, and literature is the catalyst. The Goldfinch, a small, unassuming 1654 panel painting by Dutch master Carel Fabritius, has become the surprise breakout star of the Frick’s Vermeer, Rembrandt, and Hals: Masterpieces of Dutch Painting from the Mauritshuis exhibition. Johannes Vermeer’s masterpiece Girl with a Pearl Earring was expected to be the number one box office draw. That’s how it was at every other stop in the year-long American tour. At the Frick, the last leg of the tour, her beautiful face got its own room, the cover of the catalogue and 99% of the products in the museum shop.

But a random coincidence would defy expectations. The October 22nd opening of the Frick’s show just happened to coincide exactly with the publication date of The Goldfinch by Donna Tartt , a novel in which Fabritius’ Goldfinch plays a hugely significant central role. Neither the author, the publisher nor the museum had any idea of this synchronicity. It took Tartt 11 years to write the book; she got the idea 20 years ago when she saw a copy of the painting on a trip to Amsterdam. The Goldfinch was unmoving in the Mauritshuis throughout most of those decades. Nobody at the Frick was aware that Fabritius’ bird was the main character of an upcoming novel that would become an immediate best-seller.

The Frick is now selling 800 Goldfinch postcards for every 1,000 postcards of Girl With a Pearl Earring. “There is a feeling among us that people are nearly equally interested in both,” says a Frick spokeswoman.

With The Goldfinch’s help, the exhibition has become the best attended in Frick history. The museum expects the show to exceed 200,000 visitors, more than a third of its typical annual attendance of 275,000 to 300,000. Membership to the museum (which costs between $25 and $600) has also more than doubled during the exhibition’s three-month run, growing from 5,000 to 12,000. Around 100 people are joining daily, according to the spokeswoman, compared to an average of three new members per day during a typical fall season.

Fans of the book are traveling to New York from all over the country to catch The Goldfinch before it flies back to Europe. This story quotes a woman from Atlanta who made the trip just because of the book, and the exhibition was actually in Atlanta’s High Museum of Art right before it went to the Frick. The Girl with the Pearl Earring, which was itself boosted into international superstardom by the success of Tracy Chevalier’s eponymous novel published in 2000, wasn’t enough to draw Ms. Anderson to the museum in her hometown, but The Goldfinch lured her 1,000 miles to see it. This article about the exhibition focuses entirely on The Golfinch, painting and the novel.

The Goldfinch‘s charm has been more than evident to curators and fans of the Dutch Golden Age for centuries, of course. That’s why it’s included in what is basically a greatest hits exhibition. The petite piece, about the size of a piece of A4 paper, is a trompe l’oeil, a painting that creates the deliberate illusion of reality. A goldfinch stands on a feedbox, a delicate chain tethering him to the spot, against a whitewashed wall with crumbling bits of plaster. The shadows cast by the box are at a fairly steep upward angle and we see the box’s semicircular perches from below, suggesting Fabritius planned the piece for display relatively high on a wall.

Fabritius’ confident, smooth brushstrokes create an incredibly lifelike bird despite the lack of precision photorealistic detail. He learned from the best, studying under no less of a master than Rembrandt in the early 1640s in Amsterdam. You can see Rembrandt’s influence in the splash of yellow in the bird’s wing. Fabritius laid the yellow on thick and then scratched it while it was still wet using the butt of his brush. The scratch exposed the underlying layer of black. This is a technique Rembrandt taught him.

The overall look of the painting, however, is a departure from Fabritius’ early work in Amsterdam. Fabritius was 28 years old when he moved to Delft in 1650 and over time, he moved on from Rembrandt’s dark palette and atmospheric lighting to the brighter scenes and homier subjects of the Delft school of artists. Johannes Vermeer was influenced by this approach (he may have even been an actual student of Carel Fabritius, but the evidence for this is very thin).

Unfortunately Fabritius’ great artistry was severed shortly after he painted The Goldfinch. On October 12, 1654, a gunpowder magazine in Delft exploded, destroying a quarter of the city. Fabritius was killed at the age of 32. His studio was reduced to rumble and most of his paintings were lost. Only a dozen or so of his paintings are known to survive today. It’s possible that The Goldfinch was a witness to this tragedy. When the Mauritshuis restored it in 2003, they found microscopic damage to the surface. It may have been rescued from the rubble.

The Goldfinch, Girl with a Pearl Earring and the rest of the treasures will be on display at the Frick through January 19th, so you have no time to lose if you want to see the exhibition before it leaves the country. There is one more international stop of the tour in the Palazzo Fava in Bologna from February 8th until May 25th, and then the group returns to The Hague in time where they will be installed in the newly renovated Mauritshuis in time for its grand re-opening on June 27th.