The archaeological survey in advance of the construction of the Fehmarn Belt Link tunnel on the Danish island of Lolland has discovered another pre-historic treasure in exceptional condition. After the flint dagger with intact bark handle, the 5,000-year-old gillnets and the flint axe with the intact wood handle, now archaeologists have unearthed a Stone Age wooden eel fishing spear with the central bone prong still in place.

Similar spears, known as leisters, are still used to capture eels today, but archaeologists could not confirm whether the design of two lateral prongs that curve outwards with a straight, sharp central prong was used in pre-historic times as well. While individual lateral wooden prongs, bone points and more rarely pairs of prongs have been found before, this is the first time a leister has been found with all three prongs in position. It confirms that Neolithic eel spears had the same configuration as modern ones, which means the craft of eel fishing hasn’t changed much in thousands of years.

“Unfortunately, the string winding and the shaft were missing, but the position of leister prongs and bone point in relation to each other can only be interpreted as the result of a leister that has broken off – the pieces were still sitting at an angle in the old seabed. This means that we can now say with a greater level of certainly that Stone Age fishing leisters had both lateral wooden prongs and a centred bone point, although a tiny amount of uncertainty remains until we find a complete preserved leister,” [Museum Lolland-Falster archaeologist] Søren Anker Sørensen continues.

The leister has not been radiocarbon dated yet. It was discovered in an area that in the Late Stone Age had two lagoons and a 65-foot-wide belt of stone marking the spot where the coast was in around 3,000 B.C. The spear points could range from the middle to the late Neolithic. An individual lateral prong from a leister was found at another dig site in the ancient lagoon which dates to the late Neolithic.

Another exciting find from the excavation is the end of a hafted arrow. The shaft isn’t complete — the piece is about four inches long and broken in two — but the most important part of the weapon is: the pointy end. The flint arrowhead is attached, and the adhesive and binding used to fix the point to the shaft is still preserved. There was some discussion about how Stone Age peoples attached the flint parts of their weapons to the wood in the comments on the axe article (hi Virginia Burton!). This arrow answers the question neatly. You can see in the photograph how tightly wound the string binding is. 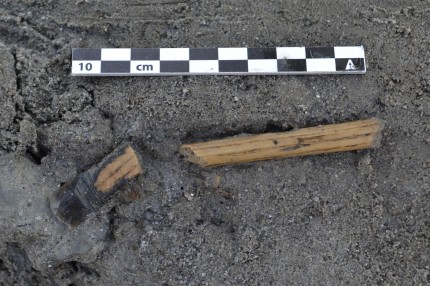