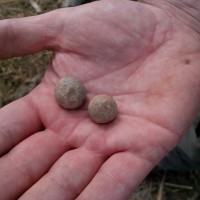 An international team of archaeologists and British war veterans have come together to excavate the Waterloo battlefield. It’s the first large-scale archaeological survey of the Hougoumont Farm area which proved to be a vital position attacked repeatedly by French forces during the June 18th, 1815, battle. So far the team has focused on the site of a wood south of the farm buildings that took the brunt of early French attacks. It’s been less than a week and a geophysical survey, a metal detector survey and test trenches have found coins, uniform buttons, fragments of firearms and English and French musket balls.

Dr Tony Pollard, Director of the Centre for Battlefield Archaeology at the University of Glasgow, leading the archaeology, said: “The full team has only been working on site for two days and we have made some very interesting discoveries. In particular, we have started a comprehensive survey, including metal detecting, of the area of the former wood to the south of the Hougoumont buildings and we have already found spent and unfired musket shots at the southern-most tip of the wood, also fragments of firearms and clothing such as uniform buttons.

“We know that shots were exchanged between the French and Allied armies in these woods during the night before the battle, as the French probed the allied position and the first real fighting took place in the same spot. I am confident these shots were fired very early in the battle, probably in the first exchanges.”

The team is hoping this excavation will answer questions about the battle. Much has been written about it, but eye-witness accounts and reports from the battlefield can be biased, muddled and contradictory. Although some topographical features have been altered either deliberately (the Lion Mount) or through natural processes and illegal metal detecting by souvenir hunters has removed a lot of the metal artifacts, the field has been left largely undeveloped in the 200 years since the battle. Battlefield archaeologists are optimistic that there is a great deal left to discover, including the locations of mass graves. The geophysical survey of the area around Hougoumont Farm detected anomalies that could be buried human remains. Any human remains discovered will be studied but not disturbed. The aim is to mark the graves, not to exhume bodies.

The Waterloo Uncovered excavation project was conceived by Major Charles Foinette, serving with 1st Battalion Coldstream Guards, and Mark Evans, an Afghanistan veteran who was also an officer with the Coldstream Guards. The dig is all the more meaningful to them because a company of the Coldstream Guards were stationed at the farm and defended it valiantly against French attacks. Several other former and current Coldstream Guards are part of the excavation team through project partner Operation Nightingale, a program found in 2012 that puts soldiers injured in Afghanistan to work on archaeological excavations as a form of vocational training and physical and social therapy. It’s been a great success from the first year and Mark Evans is living proof of it since he was first introduced to archaeology through his participation in Operation Nightingale as an Afghanistan veteran suffering from PTSD. To have soldiers working at the site lends valuable insight to battlefield archaeology.

“Now we’ve got some of the top archaeologists in the world working on this site, but none of them has ever been in a battle, and it’s that perspective that the soldiers bring. They’ve been there, they’ve seen it. A different time and a different place, but they understand the confusion, they understand how ground is so important to cover and to make into advances,” Evans said.

The project is currently slated to last a year, but it could develop into a longer-term investigation if the will is there.