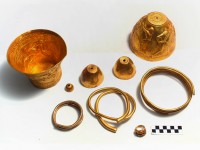 Gold vessels found in a Scythian burial mound in the Caucasus Mountains near Strovopol, southwestern Russia, have traces of cannabis and opium inside them. The artifacts were discovered in the summer of 2013 when kurgan Sengileevskoe-2 was being excavated in advance of power-line construction. Archaeologist Andrei Belinski didn’t expect to find anything of note — the kurgan had already been looted — but after a few weeks of digging, the team encountered a thick layer of clay. Underneath the clay was a rectangular chamber lined with flat stones that held a treasure trove of 2,400-year-old solid gold artifacts.

The trove consists of two gold bucket-shaped vessels turned upside down on top of three gold cups with holes in their bases, a heavy gold ring, two neck rings and a bracelet. Their total weight is 3.2 kilos (seven pounds). Seeing a black residue at the bottom of the vessels, Belinksi had forensic criminologists in Strovopol analyze the substance. It tested positive for opium and cannabis, providing archaeological evidence for a practice mentioned by ancient Greek historian of dubious accuracy Herodotus.

Herodotus gives an account in Book IV of his History of Scythians using hemp in a purification ritual after the funeral of a king.

After the burial, those engaged in it have to purify themselves, which they do in the following way. First they well soap and wash their heads; then, in order to cleanse their bodies, they act as follows: they make a booth by fixing in the ground three sticks inclined towards one another, and stretching around them woollen felts, which they arrange so as to fit as close as possible: inside the booth a dish is placed upon the ground, into which they put a number of red-hot stones, and then add some hemp-seed. […]

The Scythians, as I said, take some of this hemp-seed, and, creeping under the felt coverings, throw it upon the red-hot stones; immediately it smokes, and gives out such a vapour as no Grecian vapour-bath can exceed; the Scyths, delighted, shout for joy, and this vapour serves them instead of a water-bath; for they never by any chance wash their bodies with water. 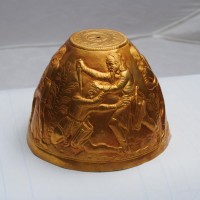 The elaborate decoration on one of the upside down gold vessels may also tie into one of Herodotus’ anecdotes. At the beginning of Book IV, he describes the Schythian warriors returning home after 28 years of war in Persia to find that their wives gave up on them years ago and had children with their slaves instead. The sons, knowing they would not be accepted by the cuckolded husbands, attempted to block their return. They were successful at first, winning battle after battle, but soon they were overcome by the mere symbols of their slave heritage.

“What are we doing, Scythians? We are fighting our slaves, diminishing our own number when we fall, and the number of those that belong to us when they fall by our hands. Take my advice — lay spear and bow aside, and let each man fetch his horsewhip, and go boldly up to them. So long as they see us with arms in our hands, they imagine themselves our equals in birth and bravery; but let them behold us with no other weapon but the whip, and they will feel that they are our slaves, and flee before us.”

The Scythians followed this counsel, and the slaves were so astounded, that they forgot to fight, and immediately ran away.

This conflict became known as the Bastard Wars. One of the vessels has a scene of an older bearded man slaying a young warrior, a possible reference to the Bastard Wars. Andrei Belinski thinks the imagery isn’t referring to a specific battle, but is more likely to be a metaphoric representation of chaos in the wake of a king’s death, an appropriate subject for royal grave goods. It would be more in keeping with the decoration of another vessel: a mythological scene of griffons tearing apart a horse and stag in what may be the Scythian underworld.

The high quality of the decoration on the solid gold pieces suggests they were made for royalty. The designs are exquisitely detailed.

To archaeologists, the information contained in the images on the gold is exciting. From the warriors’ shoes to their haircuts, the depictions are amazingly lifelike. “I’ve never seen such a detailed representation of the clothing and weaponry of the Scythians,” says Belinski. “It’s so detailed you can see how the clothing was sewn.”

The excavation of the kurgan was completed last fall, but archaeologists are hoping to return to excavate the network of trenches and earthen rings circling the mound which may indicate a ceremonial complex built around the central mound.