Charles Le Brun’s monumental portrait Everhard Jabach and His Family purchased last year by the Metropolitan Museum of Art has been restored and is now on display in the museum’s European Paintings Gallery alongside other French works from the 17th century. Feast your eyes upon this pair of very satisfying before and after pictures: 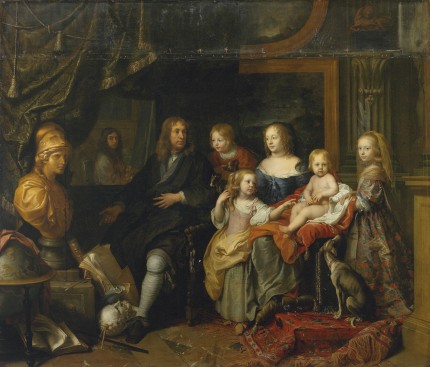 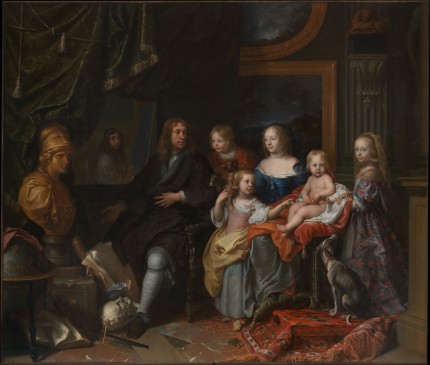 The painting is 7.6 feet by 10.6 feet, so even getting it the Met from London was a task as monumental as the portrait. It couldn’t be padded to the gills because if the crate got too big it wouldn’t fit on the cargo plane. Thankfully there was no damage in transit.

Once it arrived safely, conservator Michael Gallagher’s first task was to remove the varnish applied in the late 19th or early 20th century. It was discolored and darkened, giving the painting a yellowed tint. Using cotton swabs and a solvent custom blended to remove this particular varnish without damaging the paint underneath, Gallagher painstakingly cleaned the whole surface revealing Le Brun’s rich hues and previously invisible details like baby Heinrich’s adorable pink toes. That delicate pink and white skin is even more evident in figure of Jabach’s daughter Anna Maria whose skin, hair and clothes look completely different with the varnish gone.

That was child’s play compared to the work Gallagher and his team had to do to repair damage to the top of the painting. That big horizontal line you see running across the width 18 inches below the top is a fold mark. It’s not clear when the canvas was folded over, but there’s a picture published in an 1969 issue of Country Life of the painting hanging in Olantigh Towers, the Kent stately home where it lived from 1832 until the 2014 sale, that shows the painting folded. Olantigh Towers burned in 1903 and was rebuilt on a far more modest scale. It’s possible the monumental painting was reducing by folding so it would fit in the smaller space of the new home.

It was a drastic, some might call it insane, choice. The top foot and a half of the canvas was folded over a smaller stretcher and hammered into place with tacks driven through the painted surface. It was finally liberated from its Procrustean prison in 2012 when the painting was flattened out and a temporary strip-lining attached around the perimeter with wax-resin adhesive. This was good enough to show prospective buyers, but it wasn’t conservation. It was up to the Met’s team had to address the fold and the tack holes.

First they had to flip the painting onto its face, remove the stretcher, strip-lining and wax residue. You can see the team in action in a series of videos posted in this blog entry by Michael Gallagher. Then they had to flatten out the fold and bring the surface in plane. Again Gallagher posted a series of short and sweet videos to demonstrate the process. Before they could deal the holes, they had to flip the painting right-side up and work from the surface. That was ingeniously done as well.

After reattaching the canvas to its stretcher, conservators added canvas insets and fills to areas of paint and canvas loss. A coating of fresh varnish was next to prepare the filled areas and other faded parts for retouching.

All that was left was putting it in the new frame, custom-made by Parisian framers who have been in business since the 1800s and shipped to New York in four sections. That turned out to be a fortunate coincidence because the painting is so huge it was barely able to squeeze through the gallery doors naked. The elaborate gilded frame was assembled and installed in the gallery where the painting now hangs in all its restored glory.