While frolicking through silent movie history yesterday, I came across a veritable treasure of a comedic short. It’s called The Mystery of the Leaping Fish and it stars Douglas Fairbanks as Coke Ennyday the “scientific detective,” a parody of Sherlock Holmes who was a cocaine aficionado albeit nowhere near as rabid a one as Mr. Ennyday. The character’s name isn’t the only shameless, even joyful, drug reference. Our hero is not only an avowed drug user, he wears a bandolier of syringes filled with liquid cocaine strapped to his chest and injects himself every few minutes. He also has a large round box labelled “COCAINE” in large print that he grabs fistfuls of powder out of that he then buries his face into with Scarface-like gusto. His wall clock eschews hour markers in favor of four words at the cardinal points: eats, sleep, drinks, dope. When the single hand points to drinks, Ennyday’s manservant makes him the beverage of champions: equal parts Gordon’s Gin, laudanum and prussic acid (a solution of hydrogen cyanide). 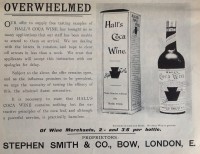 This is no Reefer Madness. There is no stern moral conclusion about the evils of drugs. Fairbanks is his usual gregarious, athletic self, just sillier than usual. This was filmed in 1916 when drugs like cocaine, cannabis and opiates were readily available from pharmaceutical companies. Many states had laws against the sale and use of coca and opium and in December of 1914 Congress passed the Harrison Narcotics Tax Act which in theory made it a federal crime. Authorized companies (pharma) and individuals (doctors, patients) could still dispense and use cocaine and opiates, however.

Douglas was still a comparative rookie when he made this wacky picture, having moved to Hollywood in 1915 and signed a contract with the newly formed Triangle Pictures where he worked under the D.W. Griffith point of the triangle (the other two points were Thomas Ince and Mack Sennet). His first film was released in November 1915. The Mystery of the Leaping Fish was released just seven months later in June of 1916. By then, with fewer than 10 films under his belt, he already had above the title billing. It was the second time he worked with husband and wife writing team John Emerson and Anita Loos. Emerson directed the picture — very amusingly, I might add; there are some great comedic beats in there — and Loos wrote the intertitles with tongue firmly in cheek. Fairbanks made his own contributions to the script, something you see reflected in the beginning and closing sequences where he’s playing himself pitching the madcap story of Coke Ennyday to a studio writer who naturally tells him this is a ridiculous idea for a picture that will never be made.

(Loos would later go on to write the novel Gentlemen Prefer Blondes, a huge success in print, on stage and in film, with the most famous movie version starring Marilyn Monroe and Jane Russell. Emerson would go on to be a huge parasite on his wife, sponging off her success, stealing her money, losing it all and stealing it again when she bounced back, all the while cheating on her and manipulating her with faked illnesses and endless drama.)

When Fairbanks rose to the loftiest heights of Hollywood fame, he reportedly came to hate this wild foray into drugged-out good times and tried to have it destroyed. With all the silent pictures we’ve lost to time and nitrate volatility and studios not giving a crap about their history, it’s remarkable that this bizarre little two-reeler survived even when the greatest star of the era wanted it gone.

Also of historical note is the relatively subdued racist angle. There’s a Chinese laundry guy/opium dealer stereotype, but it’s small potatoes compared to the blatant racism of the debate around the passage of the Harrison Act which was all about cocaine making black men crazy, aggressive, superstrong and driving them to rape white women, while the Chinese used opium to lure innocent white girls into drug addiction, illicit relationships and, inevitably, prostitution.

The movie really doesn’t care about any of that noise. It’s quite remarkable, because studios were consistently cowardly when it came to potentially controversial issues, even before the Fatty Arbuckle scandal and the later implementation of the Production Code. The story was by Tod Browning, best known today for his ground-breaking and still creepy as hell talkie Freaks. He had run away from home to join the circus when he was a teenager, so he was not easily scandalized.

Anyway, without further ado, here is The Mystery of the Leaping Fish.