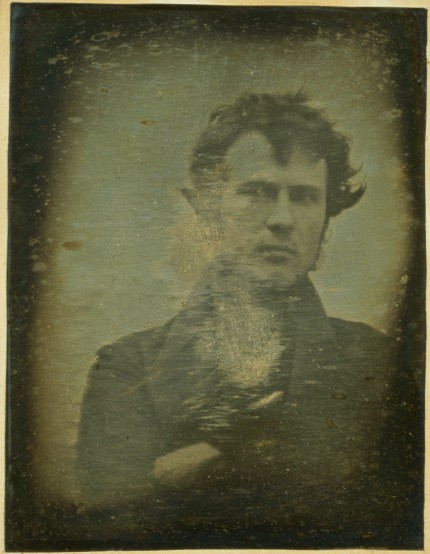 Robert Cornelius took this picture of himself outside of his family’s lamp Philadelphia store in October or possibly November of 1839. 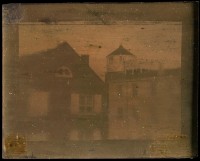 Although there were reports that Louis Daguerre had devised a method to fix images captured by a camera obscura onto a metal plate as early as 1835, the daguerreotype was first announced in January of 1839 and the process released to the public on August 19th. After detailed descriptions of how to take daguerreotype were published in Philadelphia journals and newspapers in September and October, Robert Cornelius, who had a great interest in chemistry and worked for his father doing silver plating, was approached by inventor Joseph Saxton to create a light-sensitive silver-coated plate for use in daguerreotypy. With Cornelius’ plate, Saxton took the earliest known surviving picture in the United States on October 16th, capturing the round tower of the Philadelphia Central High School and the old Pennsylvania State Arsenal building at the corner of Chestnut and Juniper from the window of his offices at the US Mint.

Cornelius was intrigued by the new technology and immediately set to doing his own experiments. His first subject was far more challenging than Saxton’s. Daguerreotypes required long exposure times of up to 15 minutes. Even the shortest exposures were at least three minutes, which made the medium less than ideal for capturing living, conscious beings. Schools and arsenals do photographers the courtesy of not even twitching once. Cornelius wanted to give it a go anyway, so he took his homemade camera — a box with an opera glass lens — into the yard behind the lamp store and there, in the daylight, he took a daguerreotype half-portrait of himself with crossed arms and tousled hair that wouldn’t look out of place in a fashion magazine today. He’s a little off-center, but I think it only makes him look more natural and less like he had to hold that pose for minutes on end. The lamp store, incidentally, was located on 8th Street between Market and Chestnut, just five blocks from the US Mint where Saxton took his first photograph.

After his first foray into daguerreotypy, Robert Cornelius caught the bug. In February of 1840 he opened a portrait photography studio and captured the likenesses of other sitters, wealthy clients and family and friends. He also published what is believed to be the first photograph in an advertisement in the Philadelphia Public Ledger. Very few of his works, only around two dozen, have survived. Thankfully his masterful selfie is among them.

Cornelius quit the photography business in 1843 and returned to work for the family’s lamp and chandelier concern where he had a very successful career building a better mousetrap, mainly lamps that ran on cheaper and more easily accessible fuels like pig lard rather than the prohibitively expensive whale oil that was still the default option when he began. Under his tenure the company became the largest lamp business in the country before they were eventually overtaken by other better-mousetrap-makers. Robert Cornelius retired a wealthy man in the 1860s.