France has returned the head of a 7th century statue of the Hindu god Harihara to Cambodia more than 130 years after it was removed. The head was taken from the Phnom Da temple in Cambodia’s southern Takeo province in 1882 or 1883 by French linguist and archaeologist Étienne Aymonier who was the first to fully explore and document Khmer ruins in Cambodia, Thailand, Laos and Vietnam in the late 19th century. Cambodia was a protectorate of France at that time, part of the colony of French Indochina, and Aymonier was the colonial administrator. From 1874 through 1882 or 1883,

Aymonier surveyed ancient temples and monasteries in southern Cambodia and helped himself to a large number of artifacts which he brought back to France with him. Aymonier’s collection of Khmer treasures went on display at the Paris Exposition Universelle of 1889. The next year they were joined to the Asian collection of the Guimet Museum in Paris.

Harihara is a syncretic deity that blends elements of Vishnu and Shiva, the deities of creation and destruction. The iconography of the statue head is typical of Harihara: the elaborate hairstyle of braids bound together in a multilayer bun on one side of the top of the head, a cylindrical mitre on the other side, a third eye on the forehead and a crescent moon in the middle of the hair.

While the head was in the museum in France, in 1913 French archaeologist Henri Parmentier found the headless body of a statue in Phnom Da. In 1944 the body was moved to the National Museum of Cambodia in Phnom Penh. Just over a decade later in 1955, Cambodian archaeology expert Pierre Dupont posited that the head in the Guimet and the body in the Phnom Penh museum belonged together.

Dupont’s hypothesis was recently proved correct when the restoration workshop of the National Museum made a mold of the upper body and sent it to France. It matched the head perfectly. The head and other artifacts collected by Aymonier now at the Guimet were legally exported, so there was no question of a lawsuit or court case. Aymonier had the permission of King Norodom to export the works to France where they would be exhibited to show the West the importance and beauty of Khmer art. The Guimet and the National Museum made a deal to exchange the head for the recently excavated pedestal of a 10th century that matches a statue in the Guimet collection. Both pieces are on permanent loan, so there’s no official change in legal ownership.

On January 21st, conservators reattached the head of Harihara to the body at the National Museum in Phnom Penh. The ceremony was attended by 200 people, including government and museum officials, diplomats, foreign dignitaries.

“After it was separated 130 years ago, we are welcoming the reunification of the head and the torso of Harihara,” Deputy Prime Minister Sok An said at the ceremony. “According to our Khmer culture, the reunion is symbolic of prosperity.” 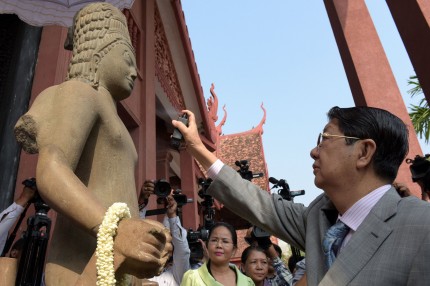