On the ceiling of the Three Kings’ church in Hittisau, western Austria, is a large scale painting of The Last Judgement. That is not unusual. What is unusual is that one of the figures depicted going to hell is Winston Churchill in a red wig. 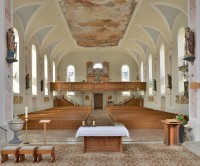 The Roman Catholic parish church of Hittisau was built in 1842, funded by a bequest from priest Josef Schnell who stipulated in his will that construction on the new church would have to begin within five years of his death or no dice. Schnell died in 1838, so they just made it in under the wire. The Three Kings’ church was completed in 1845. In 1850, artist Josef Bucher made three altarpieces to adorn the high altar, but other than that the interior decoration was quite spare.

That rainy day came in 1940. Now Austria and Germany were the same country, and it was a country at war. New church mural commissions were few and far between and this time when Maisburger reached out to Kolmsperger, his fee had dropped enough to make him affordable for the Three King’s church. The linked article says Kolmsperger was motivated to accept this small-potatoes gig in a tiny village in rural Austria in part because he feared conscription, but he was born in 1881 and I seriously doubt 60-year-old men were in fear of the draft, not in 1940 at any rate. It was at the end of the war when old men and young boys were dragged into service.

As the Battle of Britian raged in the late summer and fall of 1940, Waldemar Kolmsperger began work on the Apotheosis of Christ in Heaven and Hell. He worked behind a white sheet so people didn’t see the painting until after it was completed in 1941. When the work was finally revealed to the public, the people of Hittisau were horrified to find that Kolmsperger had not only flipped the entire village the bird, but he had pulled a Dante and put a living political figure in hell.

Hans Weiss said: “The fresco did not include on one side heaven and hell on the other, apparently the artist disliked the area so much, he decided to paint two hells. 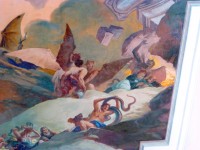 “Secondly, there was quite noticeably a picture of Winston Churchill right at the heart of the hill where Judgement Day was being carried out, showing him carrying a huge bag of money which represented his ill-gotten gains for his treacherous behaviour, and containing the writing “100,000 pounds”.

“Despite the protests of locals the artist refused to change it, and there was a huge row that went right up to the bishop. Locals were convinced that once bomber command found out about the insult, they would deliberately target the church in order to eradicate it.

“The Bishop apparently agreed and he eventually ordered the artist to disguise Churchill by giving him a red wig, and to change the word pounds to gold.”

So Kolmsperger grudgingly made the changes, plopping a ginger Moe wig on Churchill’s head so instead of looking like a bomb-baiting Winston Churchill, he looked like a bomb-baiting Winston Churchill in a ginger Moe wig. He wasn’t happy about it, though, and apparently plotted revenge. His plan was to add a few of the locals to the hellscape, and since he’d already put a couple of topless ladies in the mural who were eerily similar to women from the village who Kolmsperger was suspected of having bedded, nobody put it past him. The villagers are said to have chased him out of town before he could make his final alteration.