The Ecstasy of Saint Teresa, a statue by Gian Lorenzo Bernini in the church of Santa Maria della Vittoria in Rome, has received a thorough cleaning and restoration, the first cleaning in 20 years. There were water stains from a leaking window and layers of black grime from dust accumulation, smog and other airborne pollutants. Now the bright white Carrara marble shines like it did when Bernini first polished it in 1652. Restorers also found something previous interventions overlooked: stucco and paint added to part of the travertine base to make it blend into the background of the chapel walls. Those additions have been removed, restoring to the base, which is not the usual geometric pediment but carved to look like a rising swirl of clouds, its original balance.

The statue of Christian saint and mystic Teresa of Ávila captured at the moment of religious ecstasy brought on by an angel in the course of repeatedly piercing her heart with an arrow is considered one of the great masterpieces of the High Roman Baroque. It was commissioned by Cardinal Federico Cornaro of the patrician Venice family who had chosen Santa Maria della Vittoria as his burial site and wanted it significantly gussied up. He hired Bernini to design the entire chapel with the Saint Teresa group as the centerpiece because Santa Maria della Vittoria belonged to the Discalced Carmelites which was also Saint Teresa’s order.

Bernini, the leading sculptor of the age and internationally famous years at this point, was taking smaller private commissions from noblemen like Cornaro because he was between papal patrons. Pope Urban VIII, an avid art collector and a major patron of Bernini’s who gave him the most important public jobs like the construction of St. Peter’s Square, had died in 1644 and the new Pope Innocent X, wasn’t a fan. Bernini only got one public job under Innocent, the Fountain of the Four Rivers in Piazza Navona. He got back in the papal graces with the election of Pope Alexander VII in 1655. The creation of Teresa and the chapel took up a good chunk of the interregnum, from 1647 to 1652.

Saint Teresa was still a fresh face on the saint scene, having died in 1582 and been canonized in 1622, but she had been renown and revered in life thanks to her mystical writings. Bernini’s sculpture depicts a famous episode from her life, an ecstatic vision of the exquisite pain of God’s love. We have Teresa’s own description of this ecstatic vision in Chapter 29 of her autobiography, The Life of Teresa of Jesus:

I saw close to me toward my left side an angel in bodily form. I don’t usually see angels in bodily form except on rare occasions; although many times angels appear to me, but without my seeing them, as in the intellectual vision I spoke about before. This time, though, the Lord desired that I see the vision in the following way: the angel was not large but small; he was very beautiful, and his face was so aflame that he seemed to be one of those very sublime angels that appear to be all afire. They must belong to those they call the cherubim, for they didn’t tell me their names. But I see clearly that in heaven there is so much difference between some angels and others and between these latter and still others that I wouldn’t know how to explain it. I saw in his hands a large golden dart and at the end of the iron tip there appeared to be a little fire. It seemed to me this angel plunged the dart several times into my heart and that it reached deep within me. When he drew it out, I thought he was carrying off with him the deepest part of me; and he left me all on fire with great love of God. The pain was so great that it made me moan, and the sweetness this greatest pain caused me was so superabundant that there is no desire capable of taking it away; nor is the soul content with less than God. 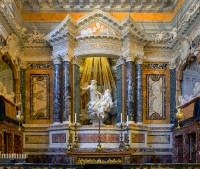 Bernini followed her description very closely, sculpting the beautiful young cherub with the arrow poised to thrust into Teresa’s welcoming chest. Teresa’s face is the very picture of bliss, a sensual, erotic, lip-parted expression that has been copied and sketched by artists ever since. Bernini carved the whole sculpture out of a single piece of marble, playing with texture and thickness to give the draping of the clothes a natural softness. The areas where the marble is thinnest are almost translucent. The cloud base serves as Teresa’s fainting couch and symbolizes the support of the divine granting her this vision. On the walls of the chapel are two trompe l’oeil theater boxes in which the most illustrious members of the Cornaro family, including Cardinal Federico Cornaro and Doge Giovanni I Cornaro, watch and discuss Teresa’s ecstasy like so many pervie Statlers and Waldorfs.

Behind the sculpture are rays of gilded stucco which glow in the light of a hidden round window Bernini cleverly installed behind the aedicule (the architectural pediment that tops the sculpture). It acts like a natural spotlight, and the yellow stained glass elements are like gels that warm up the color of the light. It was this window, also known as the oculus, that was leaking, letting in the rainwater with its large sampling of the city’s particles. Restorers resealed it so it’s again watertight.

The restored chapel was officially presented to the public on November 26th, 2015.