The skeleton of 18th century Italian missionary Giovanni Battista Sidotti has been identified in Tokyo. The remains were unearthed in July 2014 during construction of a new upscale condominium development on the site of a long-demolished prison for Christians. Two other skeletons were also discovered near the first. Earthenware fragments and other artifacts found in the layer date it to the early 18th century.

Researchers from the National Museum of Nature and Science pieced together the bone fragments and successfully extracted DNA from a tooth. Analysis revealed that the person was more than 170 centimeters tall, significantly taller than the 156 cm average height for a Japanese man at that time. DNA was found to match the genetic characteristics of modern Italians. Sidotti was reported to be 175-178 cm tall and he was one of only two Italians held in the prison. The other, Giuseppe Chiara, was a much older man, 84 years old at time of death, and his remains were cremated.

Spanish Jesuit and future saint Francis Xavier brought Christianity to Japan in 1549. He, Father Cosme de Torrès, Brother João Fernandes, a Japanese convert named Anjiro and two other Japanese men landed on the southern island of Kyushu and began to preach, which, since only one of the priests had managed to learn a bare smattering of Japanese, mainly consisted of reading from a version of the Catholic catechism Anjiro had translated into Japanese.

The first Christian, called Kirishitan in Japanese, converts were Anjiro’s friends and family. Christianity spread quickly and by 1560, there were 6,000 converts on Kyushu. In 1563 the first daimyo, Omura Sumitada, converted, and in less than a decade had forced everyone in his domain, 35,000 people, to convert as well. Converting daimyos proved essential to the Jesuit mission, because in one fell swoop entire populations would be made to convert by their lord. The daimyos benefited from the Jesuit’s military support, receiving essential materials like saltpeter (used to make gunpowder), weapons and aid in constructing fortifications. Mass baptisms increased the number of Kirishitan exponentially so that there were approximately 130,000 converts within 30 years of Francis Xavier’s arrival. By the early 17th century, there were 250,000 of them.

One of the reasons the new religion made such effective headway is that Xavier used the term “Dainichi,” the Japanese name of the celestial Buddha Vairocana, for God. Shingon Buddhist monks thus welcomed the Jesuits as a fellow Buddhists and in 1551 daimyo Ouchi Yoshitaka gave the missionaries an old Buddhist temple in Yamaguchi describing them as “monks who have come from the western region [meaning India, which was seen as the ultimate in exotic distant lands] to spread the law of Buddha.” Xavier ultimately realized this wasn’t according to Hoyle Christianity, so he stopped using Dainichi and switched to Deusu, a Japonified version of the Latin Deus.

That entre’ via Buddhist terminology and close relationship to warring daimyos would come back to bite Catholic missionaries hard when Japan was unified by Toyotomi Hideyoshi. To hobble the power of the local daimyo, he banished all Christian missionaries from Kyushu in 1587. He still wanted to trade with Portugal and Spain, however, so he didn’t get hardcore about quashing the Kirishitan for another decade even as the Jesuits repeatedly considered an armed campaign against him. That all changed on February 5th, 1597, when he ordered 26 Christians — six Franciscan missionaries, three Japanese Jesuits and 17 Japanese laymen converts — crucified in Nagasaki to discourage conversions.

His successor Shogun Tokugawa Ieyasu wanted to maintain friendly relations with Spain and Portugal for trade purposes, but he was convinced that Christianity was inimical to Japanese culture and society and even as he attempted to negotiate trade agreements, asked European powers to take back their missionaries and their religion. Things took an uglier turn after three successive financial scandals involving Christians broke out at court in 1612-3. The central figure in one of the scandals, a former actor named Okubo Nagayasu was rumored to be Christian although there’s no direct evidence of it. He was dead when his financial misdeeds came to light, and in the wake of the scandal, he was accused of having plotted with missionaries to bring a foreign army to protect Kirishitan against the Shogun.

That was the last straw. On Valentine’s Day, 1614, Ieyasu expelled all Catholic missionaries from Japan, closed all the churches and prohibited the practice of Christianity. From the 1614 edict:

The Kirishitan band have come to Japan, not only sending their merchant vessels to exchange commodities, but also longing to disseminate an evil law, to overthrow true doctrine, so that they may change the government of the country, and obtain possession of the land. This is the germ of great disaster, and must be crushed.”

Subsequent Tokugawa rulers enforced the edict with an iron fist, persecuting the Kirishitan, even commoners, who before then had been largely ignored, in order to exterminate the faith from Japanese soil. In every household Christians were identified, forced into apostasy and monitored afterwards to ensure they weren’t secretly following their religion. There were mass executions in which dozens of Christians who refused to renounce their beliefs were burned, crucified or otherwise dispatched publicly. 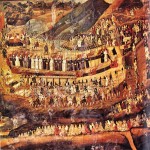 The fight against Christianity played a significant role in the policy of Sakoku, the national isolation policy that kept foreigners out and Japanese in, enacted in pieces from 1633 through 1639 and continuing for more than two centuries until Commodore Matthew Perry ended it with the business end of his gunboat diplomacy in the mid-19th century. The Shimabara Rebellion, a revolt of mostly Catholic peasants, in 1637-8, ramped up anti-Kirishitan regulations, banning the religion on pain of death.

Propaganda followed, starting with Kirishitan Monogatari (“Tales of the Christians”), a book by an anonymous author published in 1638 which detailed the many crimes and obscenities of missionaries and Christians. It inspired several other books representing Christians as grotesque caricatures. Nambanji Kohai Ki (“Grandeur and Decadence of the Church of the Southern Barbarians”) was published around 1695, 13 years before Giovanni Battista Sidotti made his suicidal attempt to sneak into Japan.

Sidotti, a Sicilian priest, had heard of the martyrdoms in Japan and was keen to brave the risk of death in God’s name. He sought and was granted permission to go to Japan from Pope Clement XI and made his way there from Manila, landing on the island of Yakushima in fall of 1708. His cunning plan was to disguise himself as a samurai, complete with topknot and kimono, just a set of fake buckteeth and glasses away from Mickey Rooney in Breakfast at Tiffany’s. He was quickly spotted by a farmer who denounced him to the authorities.

He was arrested and the next year sent to the Kirishitan Yashiki (“Mansion of the Christians”), a former school in Edo which had been converted into a prison for suspected crypto-Christians and missionaries in 1646. There Japanese Kirishitan were routinely tortured into renouncing their religion. Sidotti received much gentler treatment. He was interrogated by Arai Hakuseki, a renown Confucian scholar and adviser to the Shogun Tokugawa Ienobu and his successor Tokugawa Ietsugu.

Hakuseki came to respect Sidotti’s intellect and extensive knowledge of the world. He also believed him when Sidotti assured him that missionaries were not the advance brigade of a Western invasion. Hakuseki recommended to the Shogun that Sidotti be deported, a shocking departure from the usual death penalty, or failing that, imprisoned. Sidotti was kept in Kirishitan Yashiki under go-nin fuchi house arrest, a status with plenty of food, a comfortable room and two attendants, former Christians Chosuke and Haru, seeing to his needs. It was only when he tried to reconvert them that he was sent to the dungeon where he died of unknown causes in 1714.

Later historical accounts record that he was buried with care, and the discovery of his bones confirms their accuracy.

“His body was laid flat in a casket, a luxurious one as far as I can tell by the brackets,” said Akio Tanigawa, professor of archaeology at Tokyo’s Waseda University and lead researcher on the remains, referring to coffin pieces discovered with the bones.

“People did not bury human bodies like this,” Tanigawa stressed, suggesting Sidotti was likely given a burial “in the Christian way.” 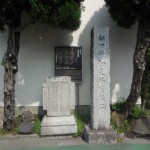 The other two bodies buried near him, one of which was interred in the more typical Edo fashion sitting up in a small tub, may be his attendants Chosuke and Haru.

Hakuseki published his conversations with Sidotti in the first volume of a three-volume book called Seiyo Kibun. The other volumes covered the five continents and an analysis of Christianity. Sidotti’s information also featured in Hakuseki’s five-volume geography Sairan Igen. These books were influential in loosening up the attitude of the shogunate to European intellectual pursuits. For the first time in a century, Western books about science and astronomy were translated into Japanese. Religion was still right out, of course, but gradually attitudes softened there too, and the torture and interrogation of Christians was abolished in 1792. The Kirishitan Yashiki, already damaged by a fire in 1725, was demolished shortly thereafter.