The burial an early Celtic woman with rich grave goods was unearthed last August at Kirchheim unter Teck, 20 or so miles southeast of Stuttgart in the southern German state of Baden-Württemberg. State Conservation Office archaeologists had been excavating the site slated for development on the outskirts of city since July of 2014, a comprehensive and thorough salvage operation to recover any remains from a Neolithic settlement from the sixth millennium B.C. that was known to have been at that location. They were shocked to find a far more recent archaeological treasure.

No skeletal remains have survived due to the high levels of lime in the soil, but archaeologists were able to get some idea of the layout of the burial from the position of the artifacts. Immediately visible were three small gold rings which may have been earrings and/or hair jewels, so they marked where he head would have been. Underneath the presumed skull area were two round objects made of sheet gold. Archaeologists believe they were part of a headpiece or hood of some kind which has not survived. A pair of bronze anklets and a bracelet of jet beads were also found.

The style of the gold jewelry dates the grave to around 500 B.C., which puts it within a few decades of the fabulously rich chieftain’s grave mound discovered at Hochdorf, less than five miles north of Kirchheim unter Teck, in 1978. Very few graves of Celtic women from such an early date have been found, even fewer with such high quality goods. It’s possible she too may have had a burial mound marking her grave. It has eroded to nothingness, but there are discolorations in the soil which suggest the was once a burial mound surrounded by a rectangular enclosure. She may not have been alone either, as evidence of two more enclosures was found nearby, but there were no artifacts or remains of any kind within them.

To preserve whatever microscopic fragments of organic material might be present and make sure they covered as much ground as possible, the team excavated a big soil block weighing 500 kilos (1100 pounds) which encompassed the artifacts. The block was then moved to the State Conservation Office in Esslingen where archaeologists could excavate it punctiliously in laboratory conditions. Quite literally punctilious, in fact, since among the tools used to excavate the artifacts from the soil block were porcupine quills.

It took two months to dig through the thick soil block with quills and small spatulas. They unearthed a total of six ornate gold rings and five sheet gold spherical objects. The pressure of being underground for 2,500 years has deformed the sheet gold artifacts, but the gold rings are in very fine condition. 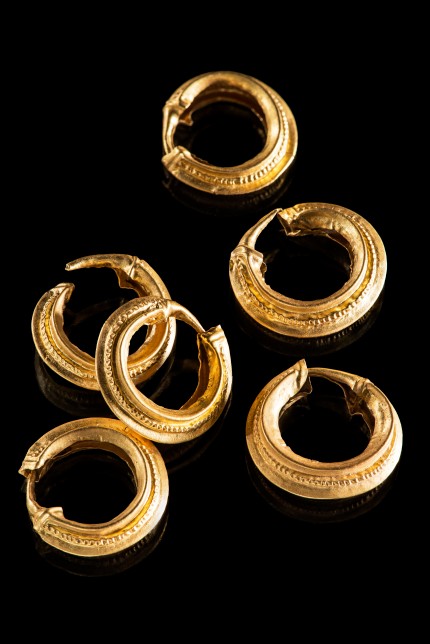 The excavation of the Neolithic settlement ended in September of last year and the development of the industrial park on the site went forward. The artifacts from the Celtic woman’s grave will likely go on display at a museum in Kirchheim near where they were found.